Hi Kids,
I just visited another state. Can you guess from the picture where I went? Dorothy, Toto, the Scarecrow, the Tin Man and the Cowardly Lion went to see the Wizard of Oz. But they started out in Kansas.

If you look at a map, Kansas is just north of Oklahoma. It takes less than two hours to get to the state line. We stopped at the Visitor Center to pick up maps and take this picture.

We were going to Wichita. Our first stop was the Pizza Hut Museum. This tiny building was the very first Pizza Hut. The company was started by two brothers. They decided to call their restaurant Pizza Hut because after writing Pizza on the sign, they only had enough room for a short word. Now there are Pizza Huts all over the world! 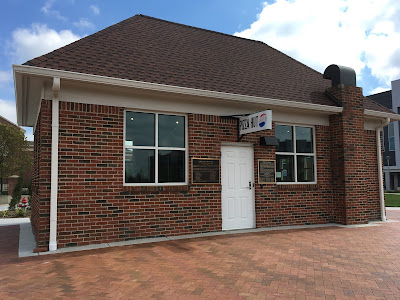 Exhibits in the museum tell all about the business and have displays on Pizza Hut toys, like a play Pizza Hut kitchen and a Pizza Hut Barbie. While Miss Elaine looked at the exhibits, I sat on this old Coca-Cola cooler. This is what people used 70 years ago -- they didn't have Coke machines or Coke in cans back then. They put ice in this cooler and put the bottles in the ice. People had to pay the clerk because there was no place to put money in the cooler. 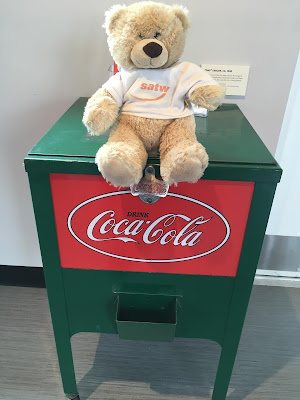 Later we went to the Museum of World Treasures. 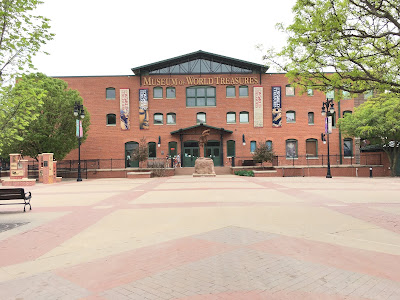 They had lots of different exhibits but I loved the dinosaurs best. 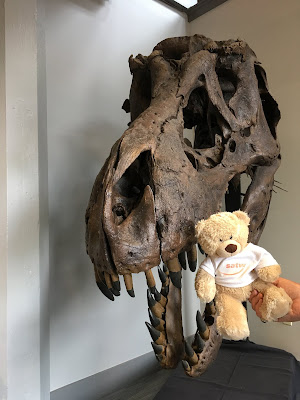 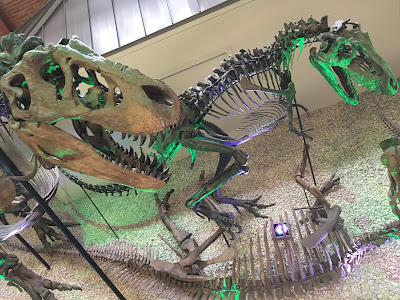 The next day we went to the airport to see an antique airplane. This is a B-29 Superfortress. B-29s were very important during World War II (1941-1945). Many of the B-29s were built in Wichita, including this one, called Doc.
Doc was used to make sure radar could detect enemy planes. 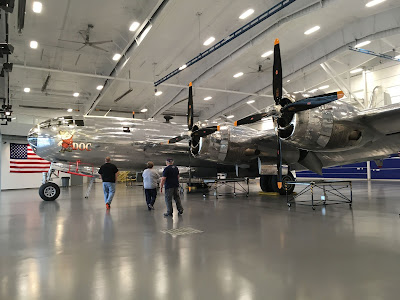 You can tell how big this plane is by looking at my picture. 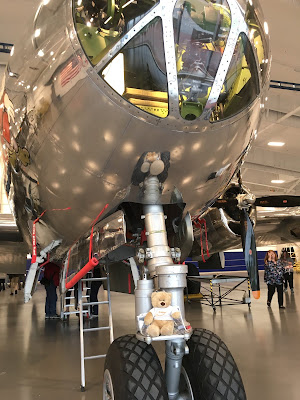 During the war, there was a shortage of men needed to build the planes so many women went to work in the plants. Many of them were riveters -- rivets held the metal parts of the planes together. Here's a famous picture -- Rosie the Riveter - and, beneath the picture is a uniform worn by one of the workers. 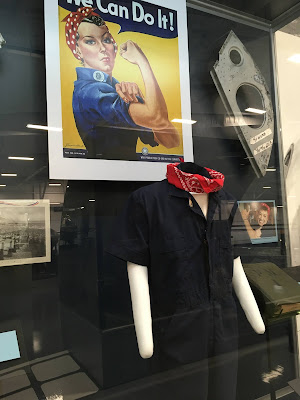 This was so cool! The lady who wore that uniform is now a volunteer at the museum. Her name is Connie Palacioz. She was 18 when she worked on the planes. Now she is 94. I was happy to meet her. 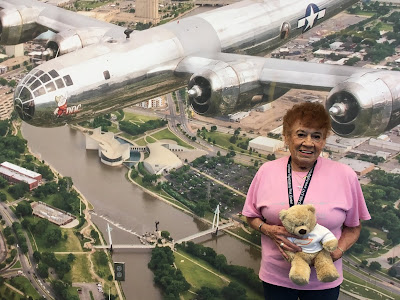 After we saw the airplane, Miss Elaine had to go to a meeting. She was visiting with people from towns all over Kansas. They told us about things to do and see in their towns. Mostly, I napped in her bag until........ 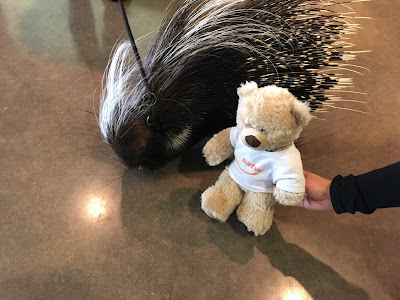 a lady walked by with an African crested porcupine on a leash. I had to meet him. He was friendly but I didn't get too close to his quills.

When it was time to go, I got to meet the ladies from Dodge City. This town was famous in the Old West. Here is my picture. Do you think I look like a real cowboy? 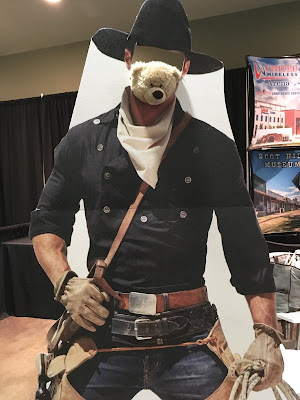 Posted by Elaine Warner at 4:24 PM No comments: 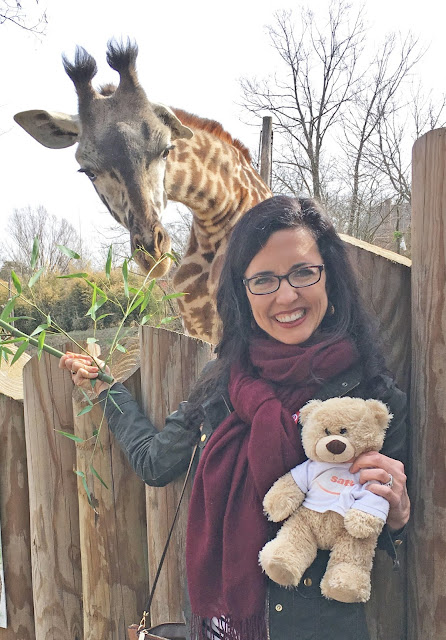 Hi Kids,
You've probably guessed that I love zoos. This spring I visited the Cincinnati Zoo in Ohio. My new friend, Miss Debbie, is holding me and feeding Zoe, a young Masai giraffe. Giraffes are the tallest living animals in the world. 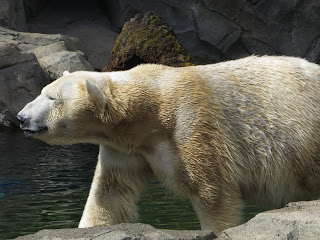 I always like to see bears. This is a polar bear. Polar bears usually live in the far north. They like to eat seals but they are kind of slow and can't catch them in the water. Instead, they wait on floating ice and wait until a seal comes up through a hole to breathe. Then they grab them with their huge paws and long claws. Because of climate change, a lot of the ice is melting. This is very bad for the polar bears. Unless we take steps to slow the heating of our planet, the only polar bears left will be the ones living in zoos. 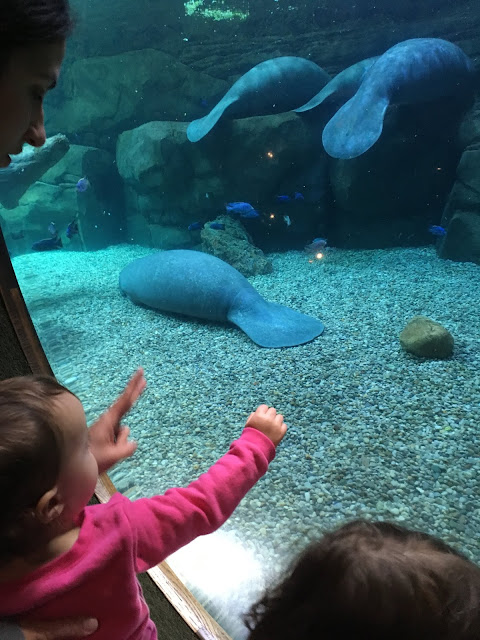 Very few zoos have manatees. These are large, peaceful water mammals. They have to breathe air but they can stay under water up to 15 minutes. They are sometimes called sea cows. You would think they would be related to whales or dolphins -- but their closest relatives are elephants. 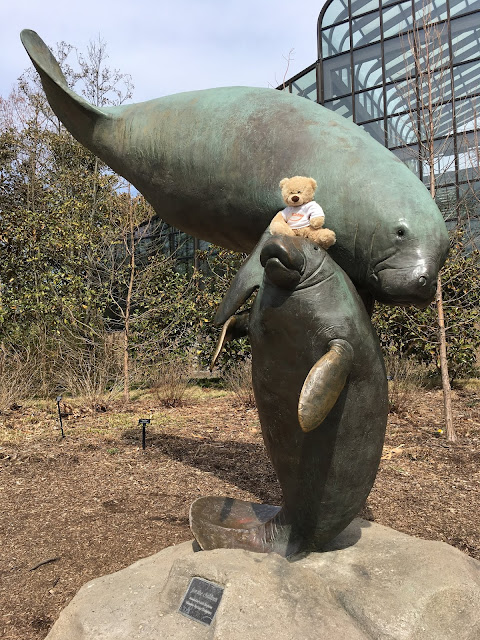 This is me with a sculpture of two manatees. Not all the animals I met on my trip were real. Actually, I guess I'm not a real bear -- but I am a real toy bear. Here I am with another not-really-real animal -- 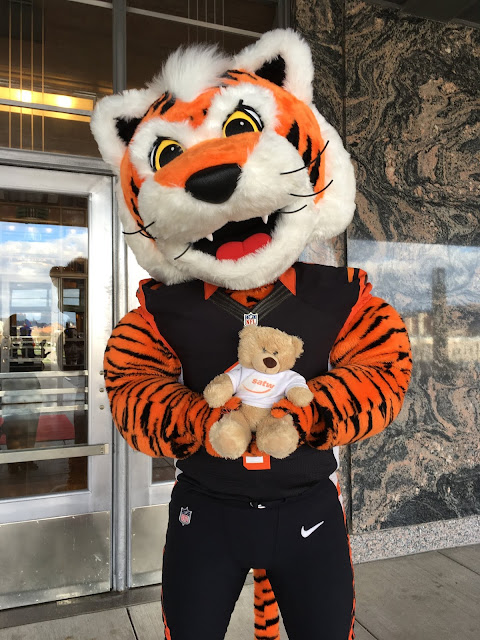 This is me with Who-dey. He's a not-really-real tiger who is the mascot for the Cincinnati Bengals professional football team. He was very friendly. I love traveling because I get to meet so many nice animals -- and people.
Love,
Fuzzy
Posted by Elaine Warner at 7:59 PM No comments: 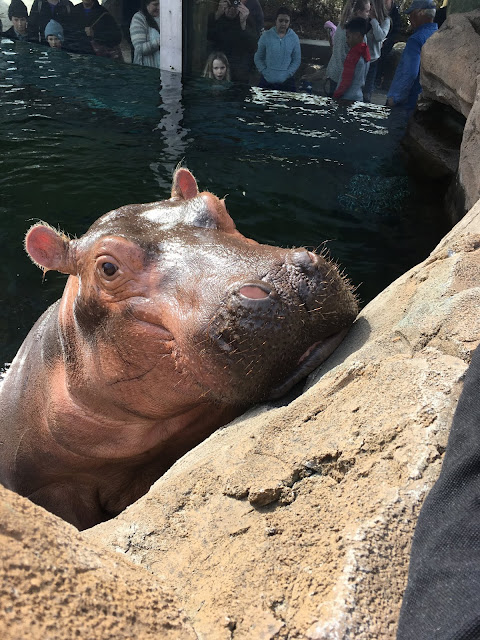 Hi Kids,
Meet Fiona. She's a star in Cincinnati. She lives at the Cincinnati Zoo with her mom, Bibi. When Fiona was born, she was the smallest hippo anyone at the zoo had ever seen. She was six weeks premature -- that means she was born early. She weighed 29 pounds. The average newborn hippo weighs 100 pounds.

People at the zoo were worried that she wouldn't survive. She couldn't drink milk, her lungs didn't work efficiently, and she couldn't stand up like normal hippo babies do. She wasn't strong enough.

She couldn't even suck milk from a bottle. Her keepers at the zoo ran a tube through her mouth to her stomach and squirted milk through a large syringe -- a syringe is the plastic part of a shot needle -- sort of a bigger tube with a pusher.

Nurses from the Cincinnati Children's Hospital came to the zoo to help. Fiona had to have someone with her day and night. They had to rub her skin with lotion so it wouldn't dry out. Normal hippos spend a lot of time in the water, but Fiona was too little. They took very good care of Fiona.

When she got bigger, they had to introduce her to water. They put swimming noodles under her tummy to help her float.

Look at her ears. They're round and cute. The keepers thought they looked like ogre ears in Shrek -- so they named her after Princess Fiona.

Fiona was a determined little hippo. When she got too big for her keepers to lift her into her tiny pool, she learned to walk up a ramp. She loved the water. She could close her nostrils (nose holes) and stay under water for several minutes.

Today she is two years old and weighs 1000 pounds -- exactly what a two-year-old hippo should weigh. She lives with her mother and together they enjoy a huge pool. Everyone in Cincinnati loves Fiona. A children's book has been written about her -- she even starred in a television commercial.

Fiona and Bibi like to eat lettuce and other vegetables. Miss Elaine and I got to get close and watch them be fed. Here is a picture of Fiona and Bibi waiting for food. 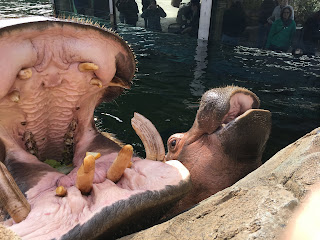 I hope you liked learning about Fiona. I saw lots of animals on my trip to Cincinnati. I'll be telling you about more of them soon.
Love,
Fuzzy
Posted by Elaine Warner at 6:59 PM No comments:

Take Me Out to the Ballgame 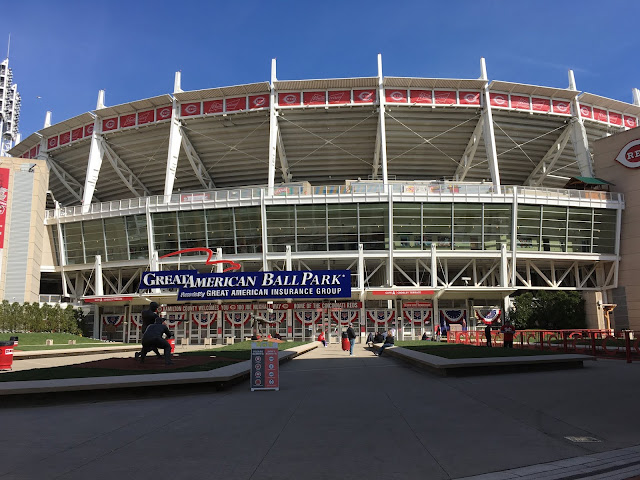 Hi Kids,
Miss Elaine and I just traveled to Cincinnati, Ohio. Can you find Ohio on a map? On our trips we get to see lots of different things. One day we went to the ballpark where the Cincinnati Reds baseball team plays. I love baseball.

We didn't get to see a game, but we did get to tour the stadium and the museum.  Here's a peek inside the stadium. The Reds were practicing before their night game. 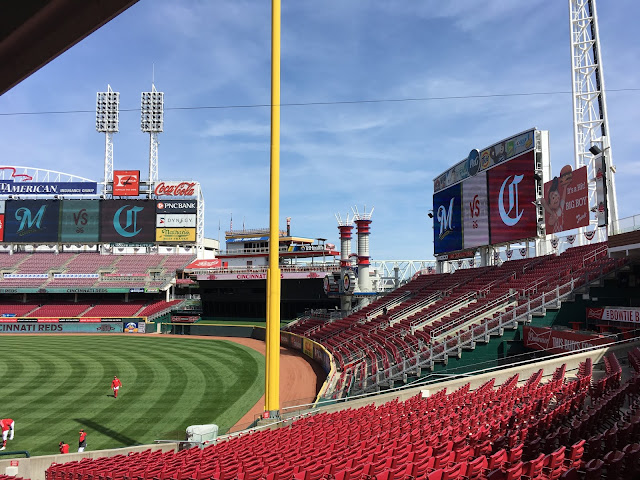 Do you see the tall things across the field? These are the lights for night games. Because of their shape, they are called toothbrush-style lights.

After we looked at the stadium, we toured the Reds Hall of Fame and Museum. One of the Reds best players was Johnny Bench. Johnny Bench is from Oklahoma. He's retired now, but when he was playing, he was the catcher for the team. He is one of the best players of all time. Here is me with the statue of Johnny. 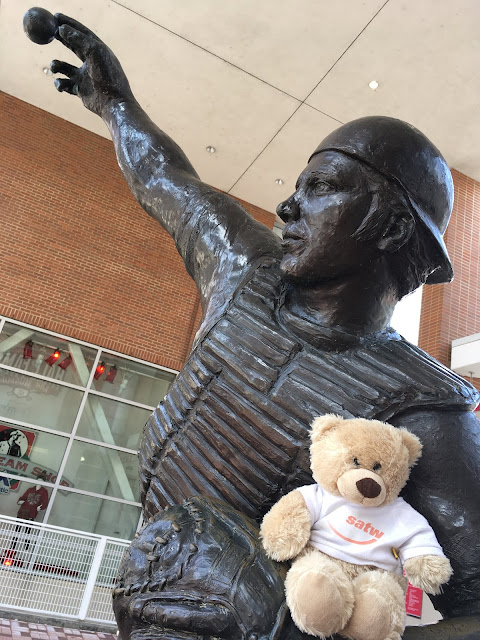 Johnny's nickname was "Hands." His hands are so big, he can hold seven baseballs in them.

The museum has all sorts of exhibits -- from uniforms and items from players to this exhibit about how baseballs have changed over the years. In the front of the picture, you can see what's inside a baseball. 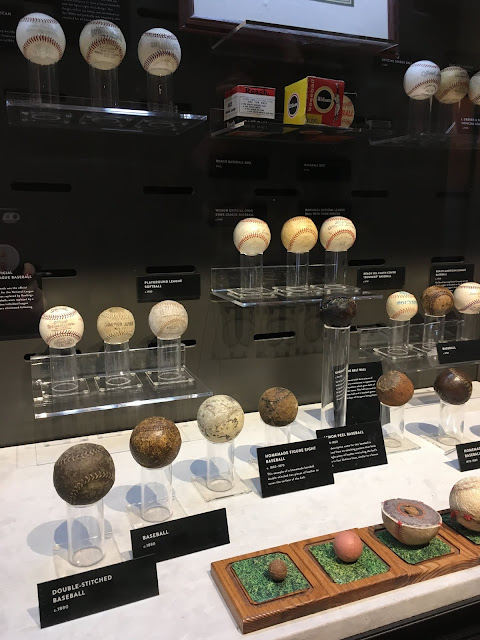 My favorite thing was getting my picture taken for my own baseball card. 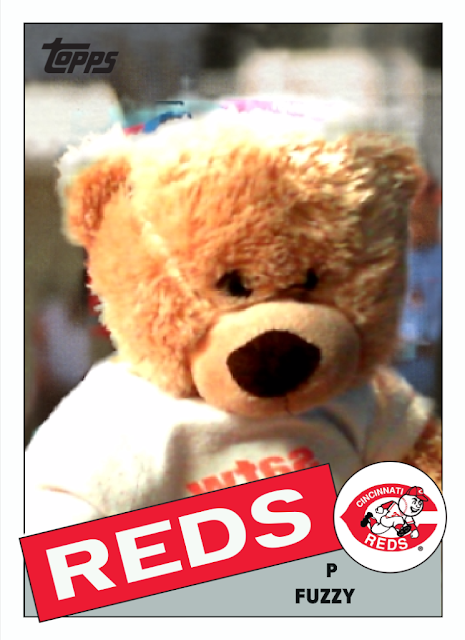 In the Hall of Fame section, there are exhibits and videos of the best Reds players. 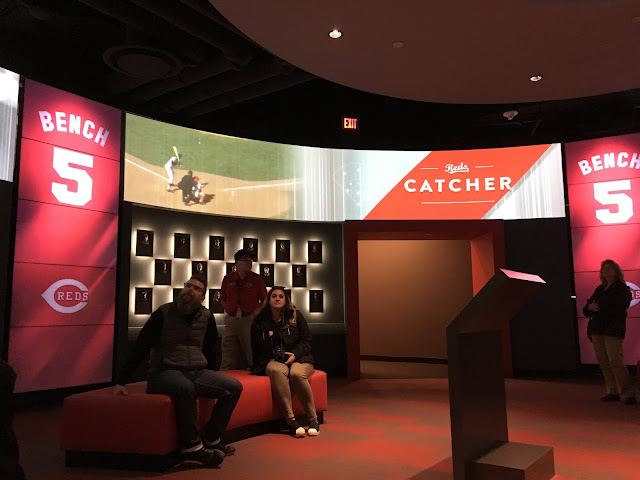 I had a really good time at the museum. And I was really lucky because during this trip I got to meet two of the Reds' mascots, Mr. Redlegs and Rosie Red. 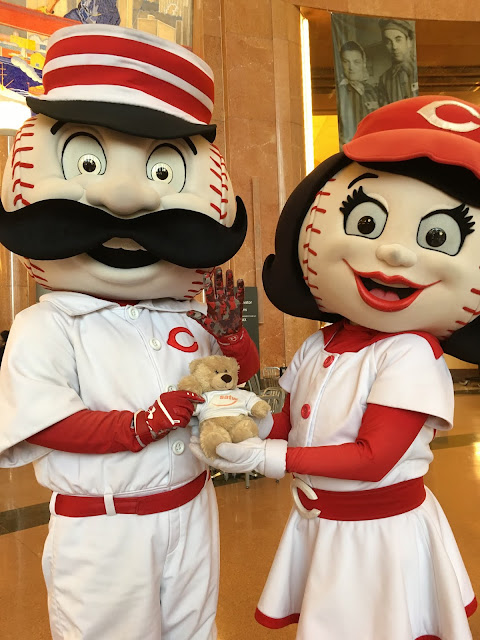 Posted by Elaine Warner at 7:03 PM No comments: