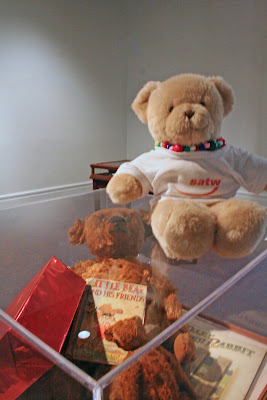 As you probably know from my postcards, Miss Elaine and I have been to Mobile, Alabama. We did lots of things and saw lots of museums. We started with the Museum of Mobile -- a history museum. They had a special exhibit of antique toys and I posed with these bears which are over 100 years old. They had to stay in a case but I got to sit on top of it. 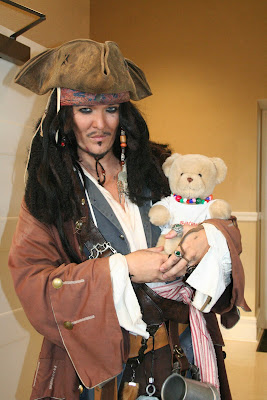 While we were there, some pirates dropped in. Don't you think this pirate looks like Captain Jack Sparrow from "Pirates of the Caribbean"? 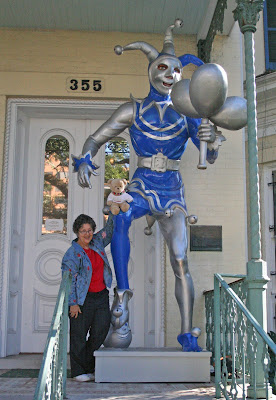 Next we went to the Carnival Museum. The first Mardi Gras in the New World was held in Mobile in 1703. Mardi Gras is a really big party that lasts for a couple of weeks. People dress up in beautiful costumes and have parades and dances. That's me on the knee of the giant jester in front of the museum. 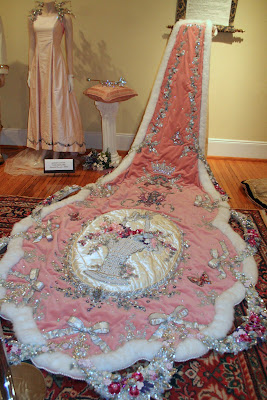 The costumes in the museum were really pretty. The queens have fancy dresses and really long trains. Not like on the railroad -- this kind of train is a long dress part that drags behind when the queen walks. This was my favorite because I love pink. 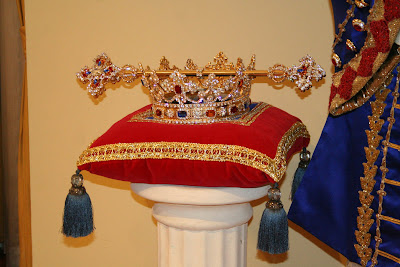 The kings and queens have crowns, too. Some of them were in the museum but I didn't get to try one on. 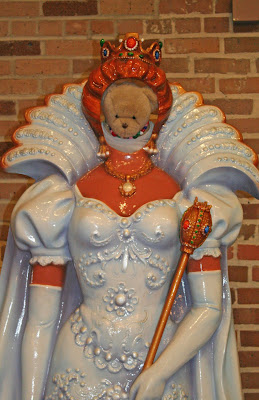 I did get to pose like a queen for this picture. 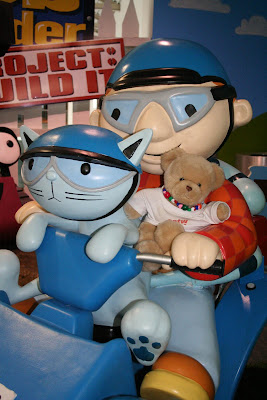 Our last museum visit for the day was at the Exploreum -- the science museum. The had a special exhibit with Bob the Builder. The had lots of things to try. I love museums.

Vanilla
Posted by Elaine Warner at 9:29 PM No comments: 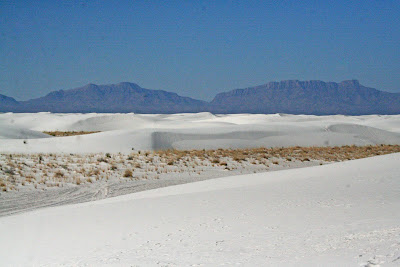 Hi Kids,
Miss Elaine and I just got back from Las Cruces and southeastern New Mexico. This was my favorite place. White Sands National Monument protects a big chunk of the world's largest area of gypsum sand dunes. Most sand is made of silica or other minerals and can range from yellow and light brown to black. The sand here is made of gypsum (hydrous calcium sulfate), a white, soft mineral that is often used in making the wallboard used in building our houses. 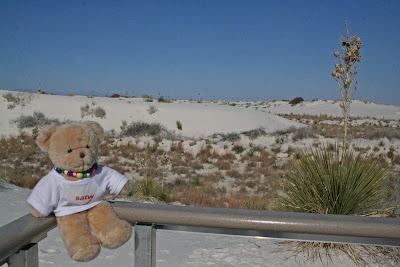 White Sands covers about 275 square miles. The sands come from playa lakes -- lakes fed totally by rainfall -- that dry up when the water evaporates. The minerals in the water are left behind and eventually break down and are carried by the wind. 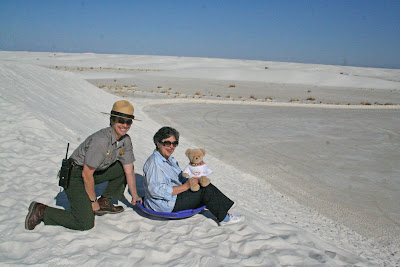 The dunes don't stay in one place -- they shift with the winds. In some areas the dunes move 30 feet in one year. That's probably about the same distance as from the front to back of your classroom. 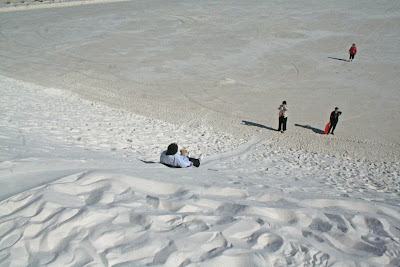 Are you surprised to see plants in the desert? The plants have to have special adaptive qualities to survive here. If they can get their roots down far enough, they can get to water that is stored under the desert floor. 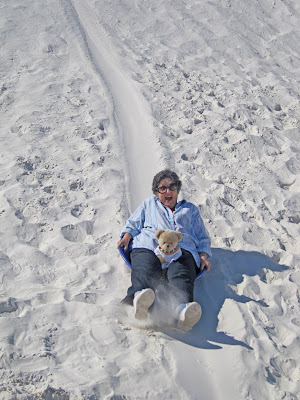 Miss Elaine was very interested in all these details. Me -- I just wanted to slide down the dunes!
Love,
Vanilla
Posted by Elaine Warner at 8:33 PM No comments: