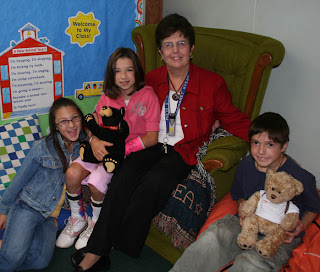 Teddy has been bugging me to start a blog for him for some time. So here it is. He is feeling quite the celebrity since there was an article featuring him in the Edmond Sun today.


EDMOND — Students in Margaret Kysar’s third-grade class at Northern Hills Elementary have three new friends. Elaine Warner, travel writer for The Edmond Sun, visited the class last month and introduced them to a stuffed bear who likes to travel. The class named the bear Teddy. Teddy travels with Warner and sends post cards back to the class.Recently, Teddy visited northeastern New Mexico where he met Oso, the official New Mexico Adventure Bear. Jill Lane, New Mexico travel specialist and Oso’s creator, donated the bear to the Oklahoma class. Along with Oso, she sent several books about New Mexico. Oso will stay in Kysar’s room, traveling on class field trips and being a reading friend for the students.Travelin' Teddies is a program sponsored by the Society of American Travel Writers in partnership with Build-A-Bear Workshop of St. Louis. Build-A-Bear has provided three dozen bears to members of SATW who are willing to take the bears on their travels. Each bear has his or her own backpack and official SATW shirt.SATW was founded in 1956 to promote responsible journalism and preservation of travel resources worldwide. The Travel Teddies program, sponsored by the 20-state Central States chapter, is designed to increase knowledge of geography and create curiosity about the world in American classrooms.

There were two pictures in the paper and three on the web site. I'll be backtracking and starting with Teddy's earlier adventures and adding pictures of Teddy so keep checking here.
Posted by Elaine Warner at 9:06 PM No comments: