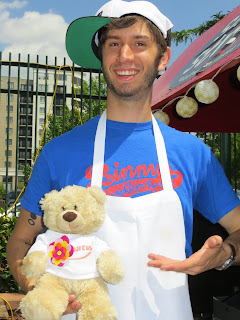 This is me at a fun outdoor food court in Ann Arbor, Michigan.  The weather was great and Miss Elaine and I had some great adventures.  I miss Tiger -- he's with Miss Kysar now -- but I'm glad I'm still traveling with Miss Elaine.  We spent a lot of time exploring downtown Ann Arbor.  But we never saw my favorite things until, one night at dinner, someone said, "Have you seen the fairy doors?"

Miss Elaine and I set out the next morning to look for the tiny doors that many believe were made by little magical creatures.  We discovered we'd passed right by some of them without ever noticing them in the days before.

In front of a shop called Peaceable Kingdom, we found this little girl, Lillian, looking at one of the doors. 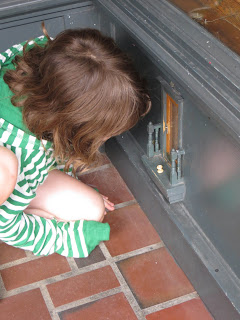 When we went inside the shop, we could look into a window into the fairy store. 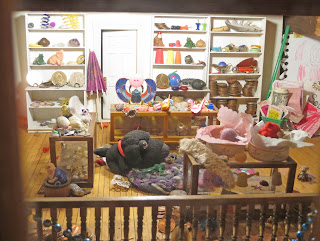 Some of the doors were easy to spot -- and looked like the doors to the people-sized buildings. 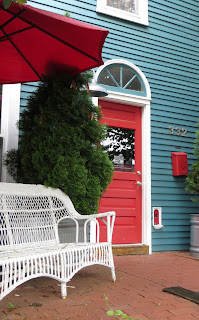 Often children leave little presents on the doorsteps for the fairies.  Cheerios, M&Ms and even pennies are popular presents.  Someone left some flowers on this doorstep, too. 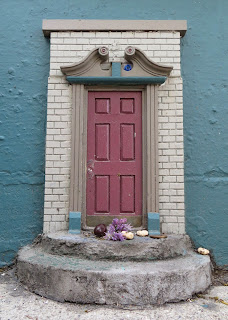 We loved it that the fairies have their own bank and ATM at the back of a big bank. 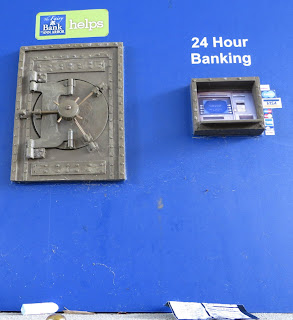 Ann Arbor is the home of the University of Michigan.  This is the bell tower on the main campus.  Inside the tower is a set of 53 bells which can be rung by using a special keyboard arrangement of stick-like batons.  Players strike the batons with their fists. 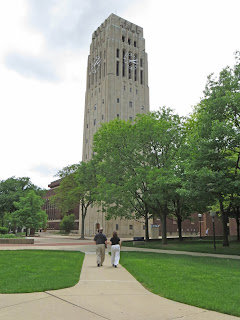 The bells are really big.  The biggest bell weighs 42 tons.  That's more than 84 horses.  A set of bells like this is called a carillon.  These bells don't swing -- instead they are hit by hammers like the one below. 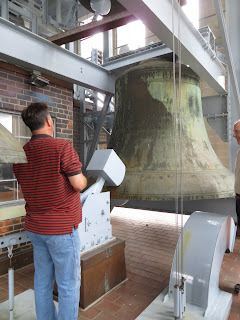 Miss Elaine got to play the carillon.  She played "Amazing Grace" and only hit one wrong note. 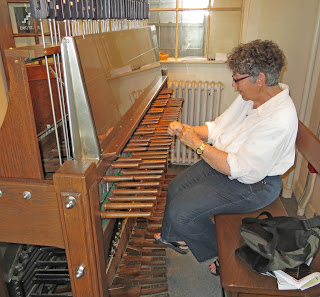 There are some really cool museums on the University campus.  This is me in front of some very old jugs.  They were used by either Greeks or Romans to store wine or olive oil.  There were Egyptian mummies in the museum, too, but it was too dark to get a good picture. 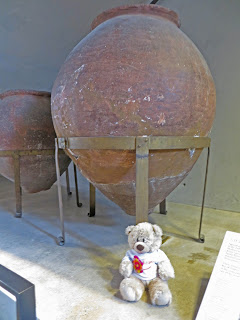 My favorite museum was the Natural History Museum.  It had lots of things in it but I liked the dinosaurs best.  Miss Elaine thought it would be funny to take my picture in the mouth of a strange prehistoric creature called a basilosaur.  It lived 37 million years ago.  It looked kind of like a huge lizard but was really a whale. 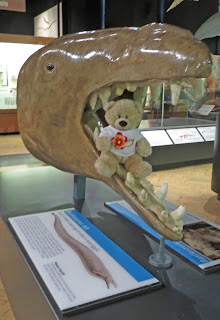 I hope you're having a good summer and a having good adventures, too.
Love,
Emily
Posted by Elaine Warner at 11:23 AM No comments: