Bear in the Bluebonnets 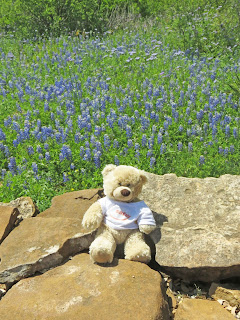 Hi Kids,
This is me on my trip to the Texas Hill Country. These are bluebonnets -- the Texas state flower. They're wild and bloom all over this time of year. They are very pretty and everybody loves to see the fields of beautiful blue flowers.

Miss Elaine and I stayed at a nice place on Lake Buchanan (Buck-anan). It is very rustic -- you can see the local limestone used around the pool. It was too cool for swimming but we didn't have time anyway. Can you find me in the picture? Look for my white tee shirt! 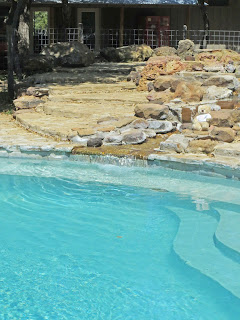 There are lots of things to do here. One night we took a wagon ride to a big dark field where there is an observatory with two giant telescopes. We could see the stars and planets up close! We also got to hear a talk about snakes and lizards. This is a crevice spiny lizard which lives in this part of Texas. When you turn him on his back, he kind of goes to sleep. If you turn him back over, you have to make sure you are holding him or he will run away very quickly! He has a pretty blue tummy -- it matches Miss Elaine's purse. 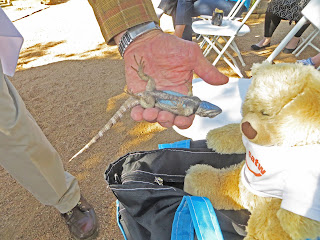 One day we took a cruise up the Texas Colorado River which runs into Lake Buchanan. Captain Shawn let me sit in the pilot house to get our picture taken. 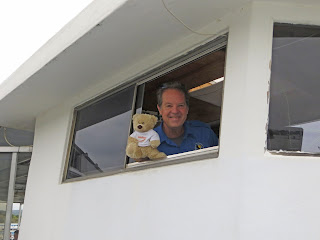 This waterfall was my favorite spot on the river. We also saw a bald eagle, some pelicans, some great blue herons and a wild pig. 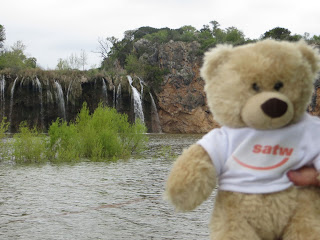 Another day we visited the Fort Croghan Museum. Two of the buildings were over 150 years old! There were people there dressed in clothes like they wore in the early days of the fort. This man was dressed like a trapper. In olden times, he would have trapped beaver, coyotes, deer and bobcats and sold the furs to make money. 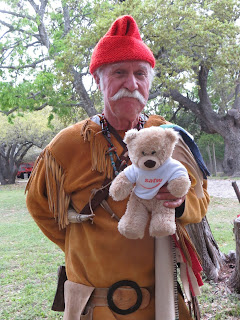 Another day we went to Longhorn Caverns. This is one of only three river-formed show caves (open to the public) in the United States. One of the others is Alabaster Caverns in Oklahoma. Have you been there? I haven't been there yet but I would like to go. We had to go down a lot of steps to get to the cave entrance. 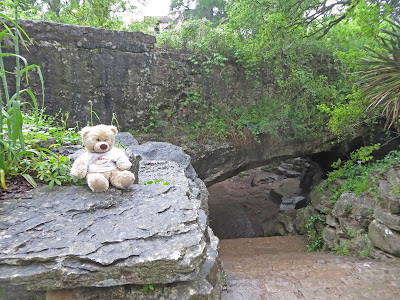 Most of the cave walls are very smooth but this is a section that has calcite crystals. You can see several of them sparkling. Crystals a solid minerals which are usually clear and have very regular sides and edges. In another room we saw crystals much larger than these. 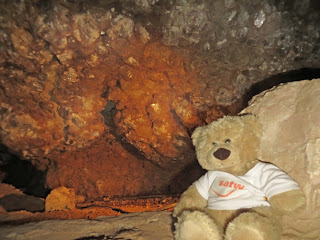 In this picture you can see the crystals much better. See how different they look from the rock around them. 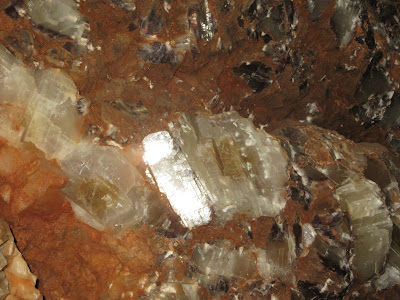 Here you can see smooth walls. The lines were originally layers of sediment -- dirt that settled to the bottom of an ancient ocean and became squashed so hard and long that it turned into rock. 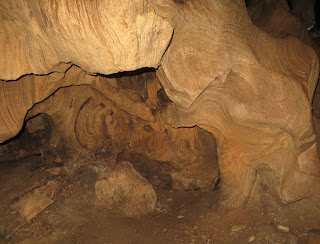 I think the cave was my favorite place. Most caves have stalactites and stalagmites caused by dripping water. This river-formed cave only had a couple of tiny ones. But it was cool to see how water carved this cave into smooth shapes. I hope you get to visit it someday.
Love,
Fuzzy