Up North in South Dakota

Hi Kids,
My name is ......  Well, I don't know what my name is.  You're going to have to pick a name for me.  I travel with Miss Elaine.  You'll meet us on Friday.  She travels and writes stories about her trips for magazines and newspapers.  We're going to share our travels with you.

Last week we were in South Dakota.  That's the third state north of Oklahoma.  We stayed in the town of Sioux Falls.  You can see the falls in the picture above.  The name of the river is Big Sioux.

While we were there, we visited the zoo.  I got to see some of the animals up VERY close as you can see.  Do you know what this one is?  Miss Kysar can tell you.  This animal is a marsupial, which means she carries her babies in a pouch -- like a kangaroo.  These animals live in Oklahoma, too. 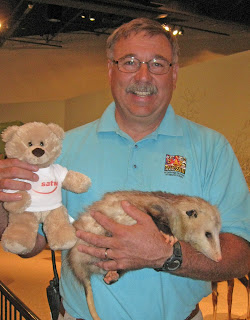 Traveling with Miss Elaine sometimes gets scary but at least she didn't let me get near the biting end of this Burmese python!  I'm glad the keepers were holding this guy.  He's a constrictor -- that's a snake that wraps around its prey and squeezes really tight. 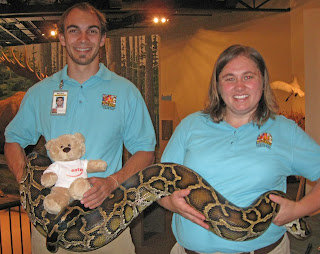 We traveled out from Sioux City.  You can see the land is pretty bare.  That little hill is called Spirit Mound.  The Indians used to tell people that the mound was the home of tiny people who would shoot trespassers with arrows.  Over 200 years ago, our country was very young and this part wasn't even part of the United States.  In 1803, President Thomas Jefferson bought a big piece of land from France.  This was called the Louisiana Purchase and covered an area which now encompasses the states of Louisiana, Arkansas, Oklahoma (except the panhandle), Missouri, Kansas, Iowa, North Dakota, South Dakota, Montana, Nebraska and parts of Minnesota, Colorado and Wyoming.

Then the President wanted to know more about the land he'd just bought.  He sent the explorers William Clark and Meriwether Lewis to check it out.  They traveled from St. Louis up the Missouri River.  When they got to this area, they heard about the mound.  They left their boats and walked several miles to find it.  They didn't find any little people but when they climbed on top of it, they could see a long way.  Here's how Captain Clark described what he saw, "from the top of this Mound we beheld a most beautiful landscape.  Numerous herds of buffalo were seen feeding in various directions."

This is the Spirit Mound.  I'm not taking a sun bath -- I just have a bit of trouble sitting up straight without help! 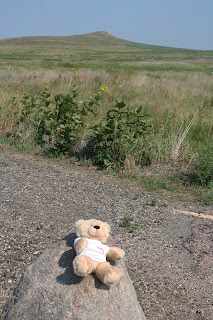 We traveled up the Missouri River, too.  Of course, when Lewis and  Clark were here, there were no dams on the river.  Now there are six dams on the Missouri.  They are used for flood control and for generating electricity.  To the left of me in the picture below is the hydroelectric (hydro means water) plant that uses the force of the river to make enough electricity for 30,000 homes.  We went down inside the dam and got to see all the equipment but we were not allowed to take pictures there.  The gates you can see in the picture are called spillways and machinery in the plant opens and closes the spillways to keep the water in or let it out. 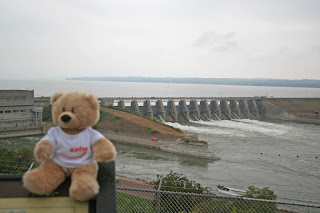 Near the dam was a visitor's center with displays telling about the animals who live in and on the river. 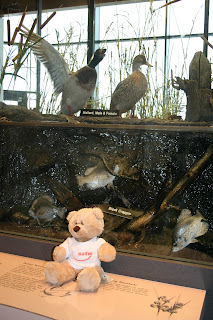 Do you see the funny thing I'm sitting on?  Those are tree roots.  You can see a steamboat in the picture behind me.  Steamboats delivered all sorts of things to people who settled along the river.  The boats were powered by steam made by burning wood to heat water.  It was a long trip up the river, so the boatmen would cut down trees on the shore.  As the river eroded the banks, the stumps would be washed out into the river.  These were called snags and they were very dangerous to boats -- often poking holes in the boats and causing them to sink. 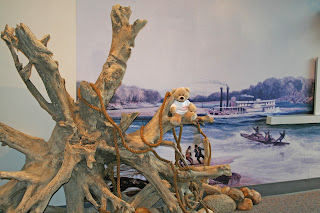 Miss Elaine used to teach music -- she sometimes even substituted at Northern Hills -- so she really loved the National Music Museum in Vermillion.  It has the largest collection of musical instruments in the United States.  Do you know what this is?  I thought it was a cannon -- but it's not.  It's a drum!  It's so big -- it weights 1000 pounds -- that it has to be moved on its own cart!  It's from Thailand and is called a glawngae, which means goblet drum.  That's what I call it because I can't pronouce glawngae and neither can Miss Elaine. 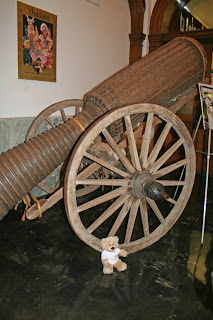 Back in Sioux Falls we went to a place called the Outdoor Campus.  They have classes for kids and grown-ups on all sorts of things to do outdoors.  They also have wildlife displays.  This is me checking out a giant bass.  Don't worry, it's not real. 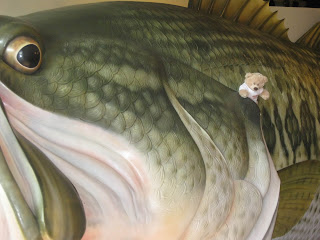 This is Miss Elaine and me standing in the fish's mouth.  Now I know what a worm feels like! 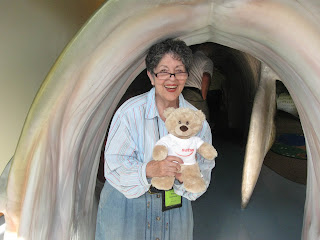 We'll see you soon.  Please think of a good name for me!