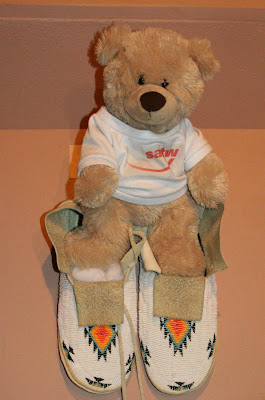 Hi Kids,
As you know from the postcards I've been sending, Miss Elaine and I have been on a trip to learn about Oklahoma Indians -- particularly the Cherokees. We started our trip in Tulsa at Gilcrease Museum. It's a great museum with lots of paintings, sculptures and artifacts. You can even touch some of them. I tried on these mocassins -- these are special Indian shoes made of deerskin and decorated with beads. These are done in a typical Southern Plains style. 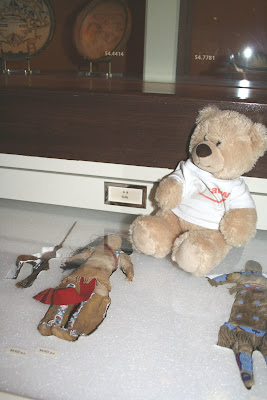 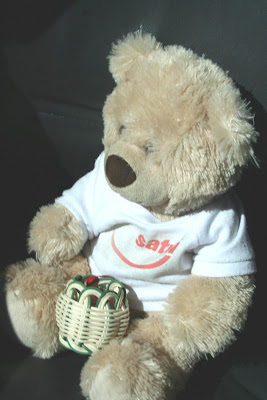 Some of the members of the Cherokee Nation brought us a gift. This tiny basket was woven by basketweaver Rachel Dew, who is considered a Cherokee National Treasure. It's a double-wall basket made of reeds. Isn't it neat? 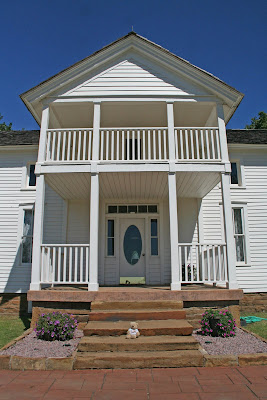 After Gilcrease we drove to Oolagah and the Dog Iron Ranch where Will Rogers was born. He was a member of the Cherokee Nation. Will Rogers is one of the most famous Oklahomans -- he was a writer, a stage star, movie star, radio star and one of the best-loved people in America. He was also an adventurer. He was a cowboy in South America and starred in Wild West shows. He is buried on the grounds of the Will Rogers Memorial and Museum in nearby Claremore. 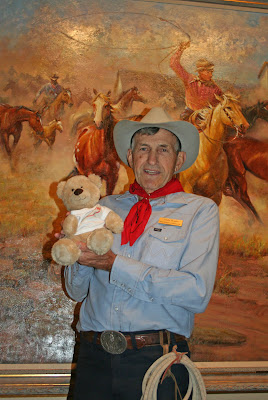 This is me with a man playing Will Rogers. He sort of looks like Will. He told us stories about Will's life. You should visit the museum. Every Oklahoman needs to know about Will Rogers. Even more important than being famous, he was a very good man. He was humble and full of good, common sense. 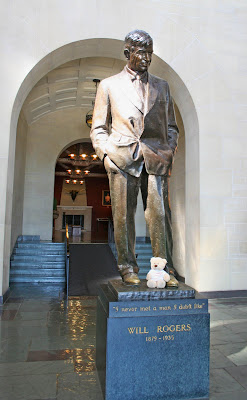 This is a statue of Will Rogers. There's one just like it in the Capitol in Washington, D.C. Every state got to choose two people to honor. Oklahoma chose Sequoyah and Will Rogers -- both Cherokees! 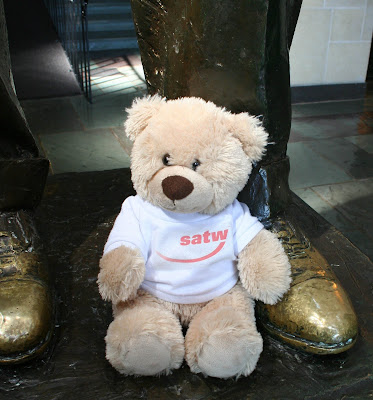 This is a close-up of me sitting on the base of the statue. See how shiny the toes of Will's shoes are? Almost every visitor rubs the toe of one of the shoes. Some people think it will bring them luck. Other people do it just to feel closer to this great Oklahoman. I rubbed a shoe, too. But I got to get closer to Will because I could sit at the feet of his statue. Big people can't do that!


Posted by Elaine Warner at 8:19 PM No comments: 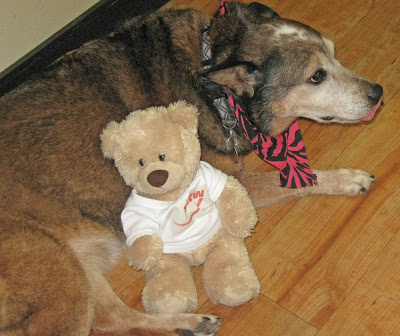 Hi Kids,
As I told you in my post card Miss Elaine, Mr. Jack, Roxie the dog and I went to Ennis, Texas. It's about 30 miles southeast of Dallas. Back in the 1870s, lots of people from the area of Europe that we now call the Czech Republic moved to this area. Many of them were farmers and the soil here, known as Blackland Prairie for the rich, dark earth, was excellent for growing crops.

They brought their food, customs and costumes with them. Even today, many of their descendants remember their Czech heritage. They don't wear their beautiful costumes everyday but when they have festivals, like the Czech Music Festival and the National Polka Festival, they wear them. 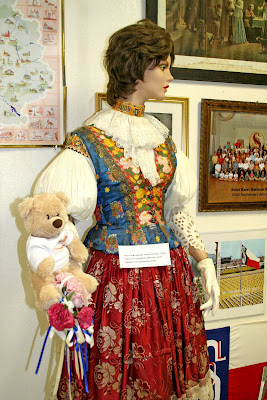 This is me with a costumed mannequin at the Visitor Center. 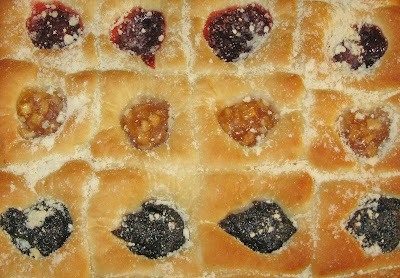 We also got to taste some wonderful Czech food. Kolaches are rolls with fruit or cream cheese fillings -- or sometimes the dough is wrapped around Czech sausages called klobase (pronounced KLO-bah-see). Miss Elaine also had sauerkraut -- sort of pickled, cooked cabbage. She really liked it. 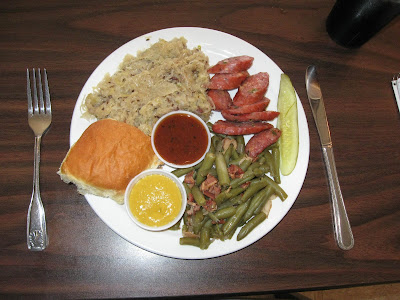 We went to a couple of little museums that had dolls wearing Czech costumes. Each little area of the old country had its own interpretation of the basic costume. A costume is called a kroj (pronounced kroy). Colors have special meanings -- red means healthy blood; blue is a sad color and gold means a good harvest. Kroj are trimmed with lace and embroidery. Popular motifs include hearts, birds and flowers. 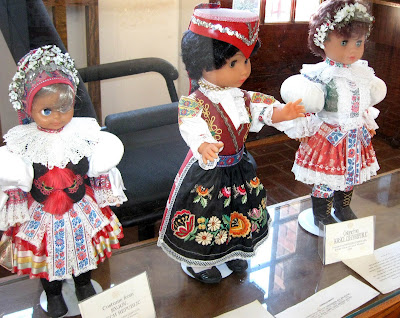 Ennis is a very nice town and I met some very nice people. I'll bet you'd like it, too.
Love,
Batman Bear
Posted by Elaine Warner at 5:31 PM No comments:

King of the Castle 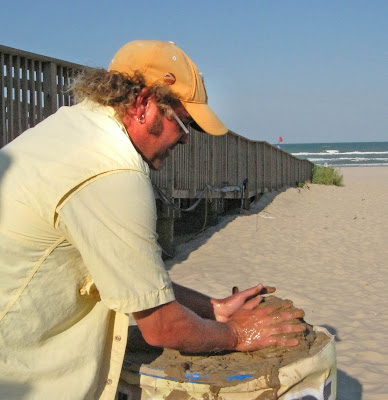 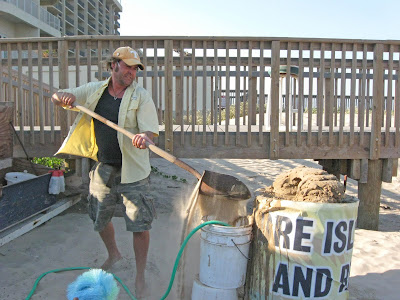 This is Sandcastle Dave on South Padre Island. He teaches lessons in how to make sand sculptures. He starts with really big buckets of very wet sand. 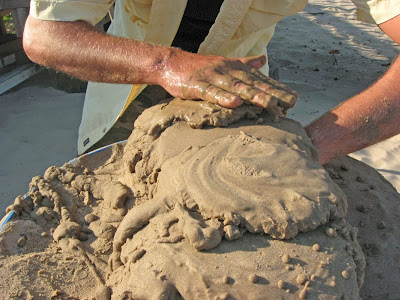 He starts with a big pile of sand that he scoops out with his hands. He says you always start with a big pyramid shape and a lot more sand than you think you'll need. When he puts a scoop on, he "wiggles" the sand with his hands to squeeze out the extra water. It makes the sand stick together so well that he can make tunnels by piling it on his hand, then pulling his hand out. 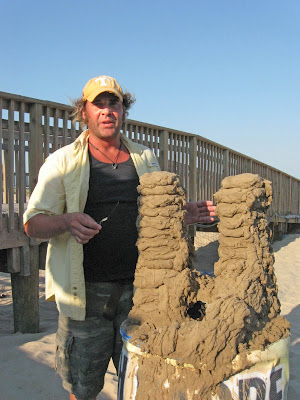 We didn't have a lot of time, so Sandcastle Dave just made a small castle for us. 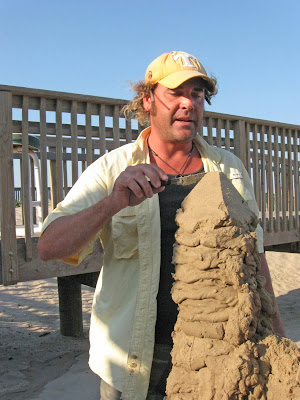 Once he got the basic shape prepared, he began carving with a small spatula. He only needs three things: the spatula, a pencil and a straw. Once he starts to carve -- and he always starts at the very top -- he never touches the sand with his hands again. 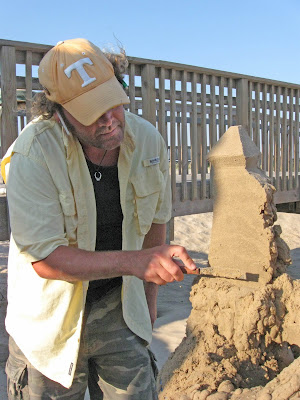 See how he can slice the extra sand off? 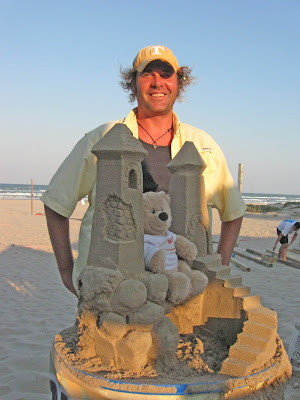 Pretty neat, huh? Then Miss Elaine tried to make a sandbear. She had a lot of help! 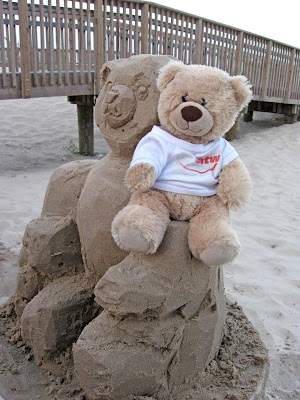 I think I look pretty good -- better than the sandbear! If you go to South Padre Island, you can take a sandcastle lesson, too. 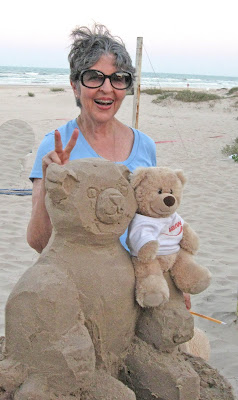 Love,
Anonymous Bear
(Please tell me my name!)
Posted by Elaine Warner at 9:43 PM No comments: