Cruisin' Down the River 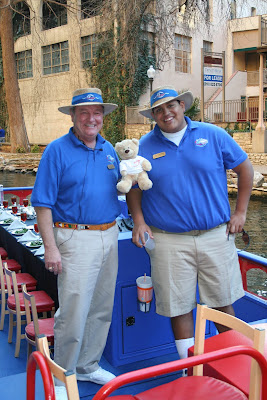 
Well, I've been on the road again -- finally! Miss Elaine and I left last Thursday for San Antonio, Texas. And it wasn't easy. We left early for the airport and got there only to find out that our plane was indefinitely delayed. BUT there was another flight leaving in only ten minutes. We ran to the gate and were able to get on that plane. We felt so smart! Then we sat on the tarmac, and sat, and sat. Finally, the pilot's voice came over the intercom, "Sorry, folks, we can't take off because the Houston airport is shut down because of fog." We had to fly to Houston to get to San Antonio. Look at the map -- this doesn't make any sense! But that's the way the airline routed us.

We finally took off, arriving in Houston three minutes after our connecting flight left. Because the airport had been shut down, all the flights were messed up. We couldn't get another flight to San Antonio -- all the seats on all the flights were filled for the rest of the day.

We didn't know what we were going to do until the people picking us up at the San Antonio airport called and said, If you can get on a flight to Austin, we'll drive there and pick you up." And that's what we did. After we got to Austin, it was a little over an hour's drive to San Antonio. We got there just in time to join our group for a relaxing dinner cruise on the San Antonio River.

At the top, that's me with the captains of our two boats. The San Antonio River used to be a big muddy ditch which occasionally flooded. Back in the 40s (I think) the city put in flood control dams and made the river beautiful. Now it competes with the Alamo as the number one attraction in San Antonio. And it inspired people in Oklahoma City to build the Bricktown Canal. 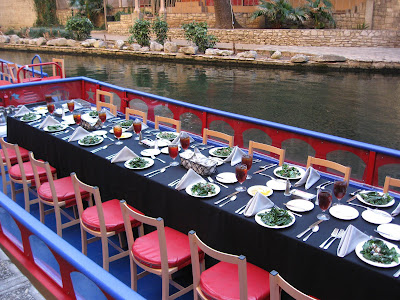 This is a picture of our boat as we boarded. We started our dinner with a spinach salad. We also had salmon (I bet they knew that bears love salmon), rice and broccoli. For dessert there was a big piece of chocolate cake. I was very careful not to get any frosting on my fur!

Here's some video Miss Elaine took from the boat. You can see the pretty lights and all the people on the sides of the river walking or eating. It is a very lively place with lots of restaurants and shops. You can also hear the captain telling us about the sights along the river.

Posted by Elaine Warner at 6:02 PM No comments: