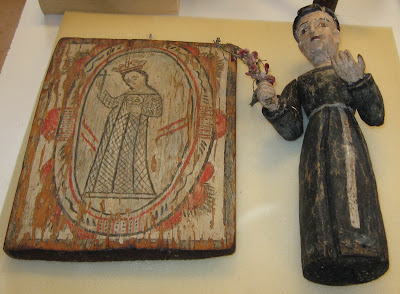 Hi Kids,
I bet you thought I was hibernating! It's been over a month since I've written. Sorry! I personally blame Miss Elaine who is working on a book and hasn't been traveling. But she never helped me tell you about my last trip to New Mexico. 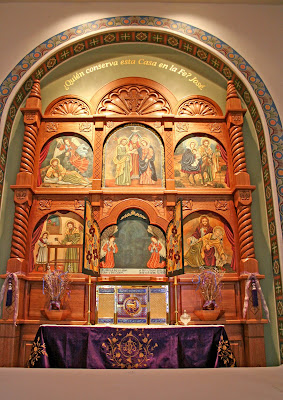 We went to see art and artists of the northeastern part of the state -- Albuquerque, Santa Fe, Chimayo and Taos. We saw a lot of churches and a lot of religious art. The Spanish were the first settlers in New Mexico -- after the Indians. Priests often traveled with explorers and settlers. Their job was to spread the Catholic faith. Many of the people they taught couldn't read so they took paintings and statues of Bible characters and holy people. Flat paintings on wood were called retablos and carved statues were called bultos. We saw lots of these! This retablo and this bulto are very old. 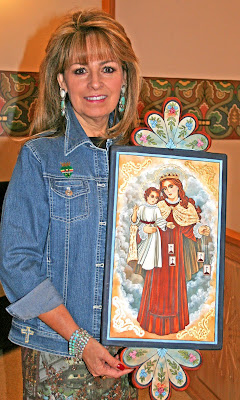 And we met several artists who paint santos (holy images, either retablos or bultos or both). This is Arlene Cisneros Sena -- she painted a beautiful altar screen for the cathedral in Santa Fe. That's it up above. 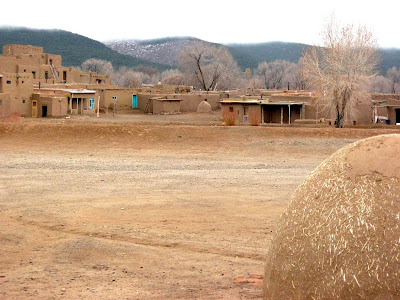 We also visited the Taos pueblo. The houses are made of adobe -- some of the buildings are multi-storied. The Indian people have lived here for over 1000 years. The houses have no electricity or running water. The little round igloo-shaped things you see are ovens. The people who live here choose to live here because it is the traditional way. 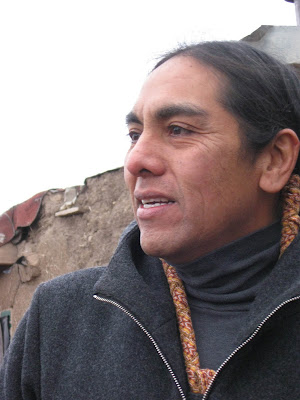 We got to meet Robert Mirabal, a well-known musician, who lives close to the pueblo. He invited us to his house to eat traditional Indian food. We had venison stew (deer meat), trout, corn soup and lots of other good things. 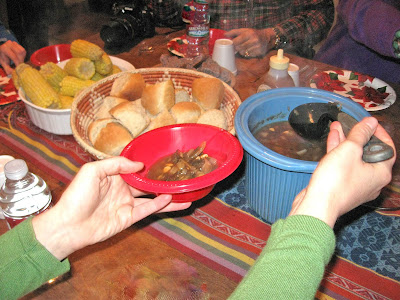 It started snowing that afternoon. Everything looked so pretty! Do you wonder why I'm not in any of the pictures? It was COLD and I didn't have an extra coat! When I wasn't in the room, Miss Elaine carried me in a bag. It was so snuggy in there I didn't want to come out. 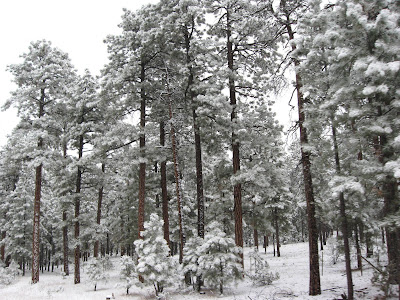 Posted by Elaine Warner at 12:28 PM No comments: