Hi Kids,
I like it when Miss Elaine takes me to museums and art galleries but I LOVE it when we get to play outdoors! Last week Miss Elaine and I visited Canyon of the Eagles on Lake Buchanan northwest of Austin, Texas. There are so many things to do there and even though we stayed several days we didn't have time to do them all. 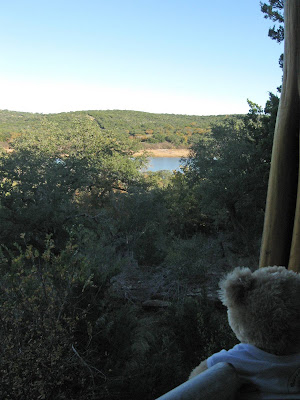 We had a cool cabin with a porch overlooking the lake. This is me enjoying the view. We were so busy I never got to rock in the rocking chair! We arrived in the late afternoon and joined the group as it started getting dark for an Owl Prowl. It had to be just at the right time -- after the other little birds had gone to bed (so the owls wouldn't eat them!) but before it got too dark to see the owls.

Did you know that owls eat little birds and rodents but they can't digest the bones or hair so they barf them up. Have you ever had a cat with a hairball? The barf is kind of like that -- they call it "owl pellets." The naturalist had several dried pellets and she let Miss Elaine put on gloves and pull the pellet apart. Sure enough, there were some tiny bones in it.

As it got darker, the naturalist put on a recording of a screech owl and soon a real owl flew down to see what was going on! It started talking back to the recorder. Then another owl arrived and they started hooting to each other! The owls didn't seem to be afraid of us and let us get close enough to take this picture. 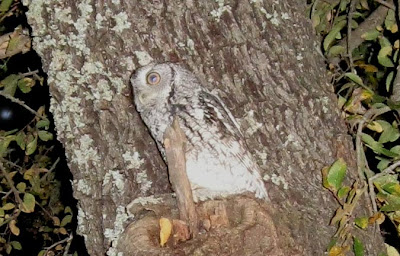 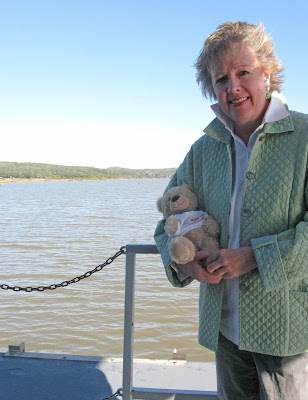 The next day we got to go kayaking on the river. We were at a really pretty place where Fall Creek falls into the river -- see the waterfalls! I hope you liked the video at the top of my post. I was a little worried because Miss Elaine was messing with the camera instead of holding me tight. And, if you'll notice, she did not put a life jacket on me. 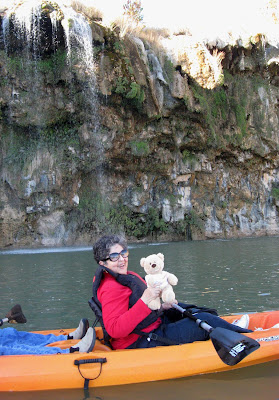 Here I am with J.P. Burchett with Buchanan Adventure Tours. He was teaching us how to geocache. Can you see the GPS I'm wearing? Do you know what GPS stands for? 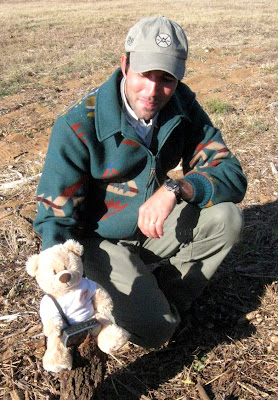 Geocaching is a combination of a hike and a treasure hunt. You use the GPS to find the location of a hidden treasure (cache). You never know what will be inside the cache container, which could be a metal box or coffee can or a plastic cylinder. 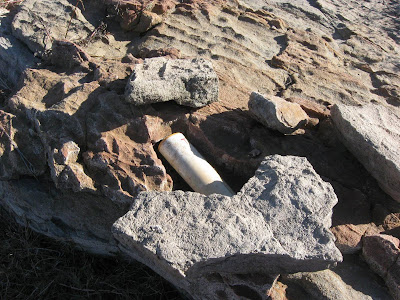 Here's a cache we found -- it was hidden under some rocks. 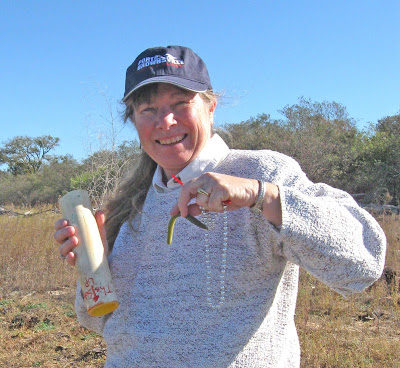 Inside our cache we found some beads, a cardinal feather, a rubber worm and a little notebook and pen to write our names and the date we found the cache. The rule is, you can take something out of the cache if you replace it with something of equal value. We didn't have anything so we just closed it up and hid it again. This is Miss Eileen, another travel writer. 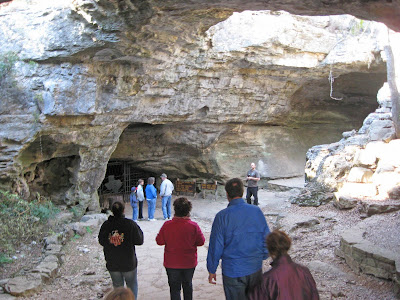 We had another adventure at Longhorn Caverns State Park. We had to walk down some steps to the entrance to the cave. This is an unusual cave in that it was created by swiftly moving water carving through the rock. There aren't very many stalactites or stalagmites in this cave -- those formations are created by water slowly seeping through rock and removing minerals. You can see in this picture that most of the walls are smoothed by the water. But you can also see some small icicles that were created by slow, dripping water. 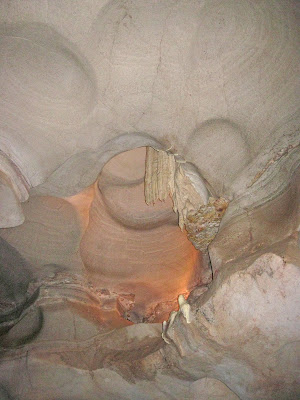 This cave formation is called "The Bear" -- it seemed like a good place to get my picture taken. Here are two more travel writers, Miss Kendra and Miss Connie. They held me so Miss Elaine could take my picture. 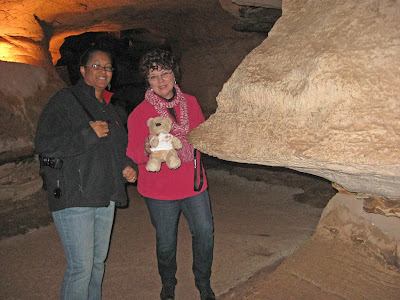 Very few creatures live in the cave -- but there were a few bats. This is an eastern pipistrelle bat and he's hibernating. 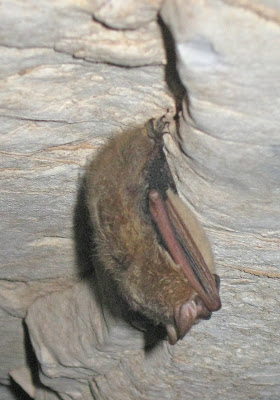 One big room in the cave is full of calcite crystals. When people first saw them they thought they were diamonds. Were they disappointed! They are pretty, though. And they look magical with colored lights on them. 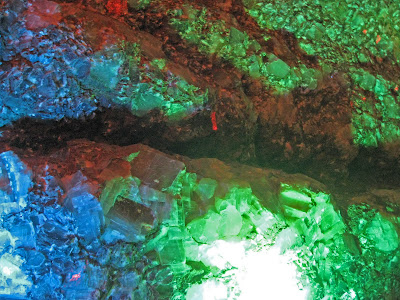 One night (Miss Elaine put me to bed early!) Miss Elaine and her friends went to the observatory in the park. They had two big telescopes and Miss Elaine got to look at the moon, Jupiter, Uranus, the Pleiades, the Andromeda galaxy and two nebula. Maybe next time she goes, I'll be big enough to stay up late. I wasn't too sad -- after all the fun I had, I was really tired. And my bed felt really good.

Posted by Elaine Warner at 9:49 AM No comments:

Labels: Canyon of the Eagles, Texas 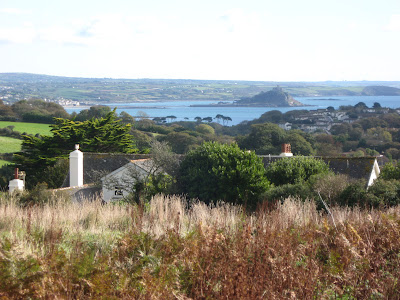 I had lots of adventures in England. Here are pictures from some of my explorations. The picture above is of Mount's Bay from Madron Hill. This is the hill we walked up to go to the Trafalgar service -- more about that later. That island in the bay -- with the castle on top -- is Saint Michael's Mount. That's how the bay got its name. The town on the right side of the picture (which you can barely see) is Penzance. The village on the left side of the photo is Marazion.
One day we went to a cider farm -- that's me on a whole lot of apples. The land is owned by Prince Charles but he rented it to a friend of Miss Zoe (that's Miss Elaine's daughter). Her friend, Andy, grows apple trees and makes apple cider. 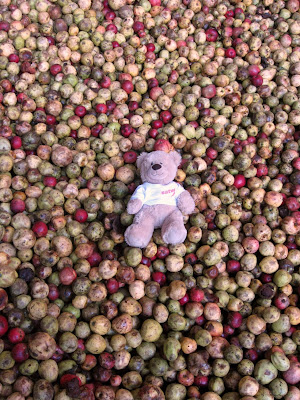 Later that week, we went to an Apple Fair in Penzance. There were all sorts of things made of apples -- including Andy's cider, apple cakes and cookies. There were many kinds of apples. People there think how things taste is more important than how they look -- so some of the apples look funny, but they're really good. 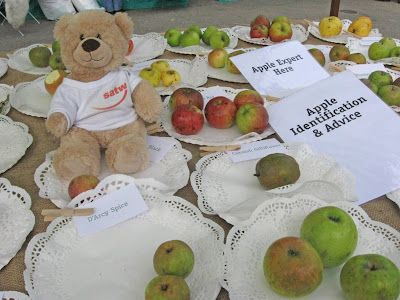 Penzance is on the south coast of England -- on the English Channel between England and France. There are many beautiful spots on the coast. This is at the Minack Theatre near Porthcurno. The theatre is carved out of the rocky coast. That's my family -- Miss Elaine and Mr. Jack, Miss Zoe and her husband, Mr. Simon. 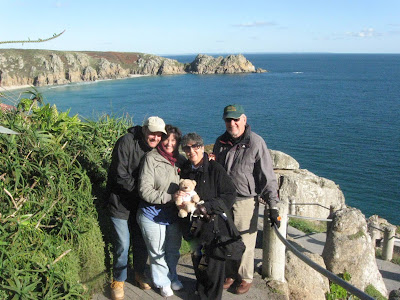 One night we went to a special restaurant called The Meadery. Mead is an ancient drink made with honey. It's alcoholic, so, of course, I didn't drink any of it. 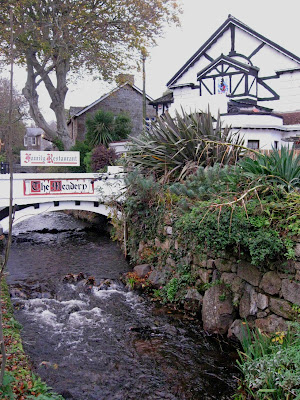 They have great food here and yummy desserts. This dessert has ice cream, toffee sauce, honey comb and crushed meringue. Mr. Simon and Miss Zoe let me taste theirs. Miss Elaine and Mr. Jack ate theirs all by themselves. 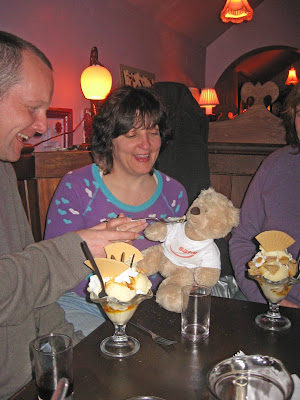 One of the coolest things we did was go to a special church service commemorating the victory of the English Navy over the French and Spanish fleets in 1805. The commander, Admiral Lord Nelson, died in the battle, so they remembered him, too. A group from a nearby Navy base brought their band and a group of sailors. The service was in a very old church -- over 600 years old. The music was beautiful and I loved the sailors -- I think they loved me, too! 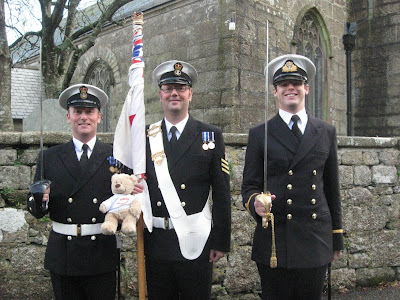 Miss Elaine isn't very good at working with video but if you click on the start button of the video below, it should work. The picture is a little fuzzy -- but I think it's fun to hear the band!

Posted by Elaine Warner at 8:30 PM No comments: