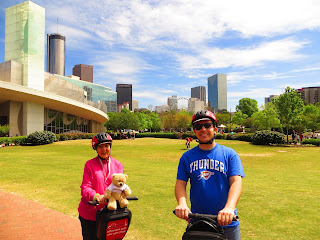 Hi Kids,
This is me with Miss Elaine and her grandson Calvin in Atlanta, Georgia, the capital of the state. Calvin was going to college in Atlanta and Miss Elaine wanted to visit him -- and she took me along. We did lots of fun things.
The first thing we did was take a Segway tour. I had to ride in the pouch on the front of the Segway.
Segways have two wheels and a motor. Before we could go, we had to take lessons. This is Calvin with our teacher Laura. 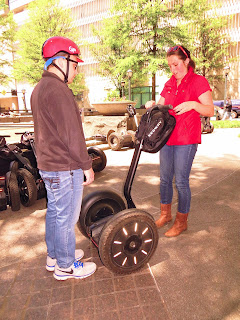 The trickiest part is getting on and off! We had to wear helmets. Thank goodness no one fell down!  After our two-hour ride, we were hungry. You're not going to believe what we ate! This is called a Sublime Burger at a restaurant named Cypress Street Grill. It is a big burger topped with Cheddar cheese, caramelized onions and applewood-smoked bacon and, instead of a bun, it is served between two doughnuts! We shared it. The hardest thing was getting into our mouths! 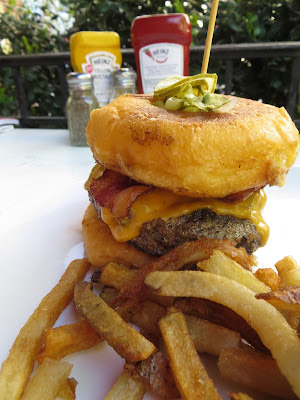 One of the most interesting places to go in Atlanta is the Jimmy Carter Presidential Library and Museum. Jimmy Carter was President of the United States from 1977 to 1981. Some of your parents were babies back then -- or maybe not even born yet.  Before he went into politics, President Carter was in the Navy and helped develop the nuclear submarine program. Calvin and I are in front of a replica of the inside of a nuclear submarine in the museum. 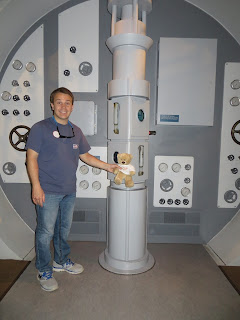 President Carter has always worked hard to solve big problems through peaceful means. Because of his efforts to make peace between Egypt and Israel he was given the Noble Peace Prize -- one of the most important awards in the world. 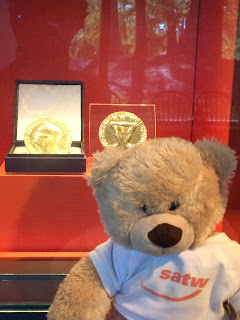 In the museum is a copy of the Oval Office in the U.S. Capitol as it looked when President Carter was president. We couldn't go into it but they had a big picture you could use for taking photos.  I pretended I was president. 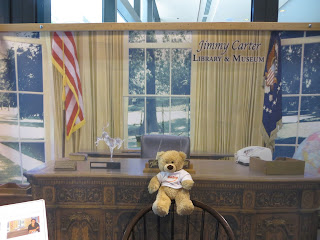 Another cool place we visited was the Fox Theater. It was built in the 1920s and opened as a movie theater in 1929. In those days, going to the movies was a big deal and theaters were often so beautifully decorated that they were known as movie palaces. Today the theater is used more for live shows and concerts but you can take tours, too. Have you ever seen a movie theater this fancy?  I hadn't! 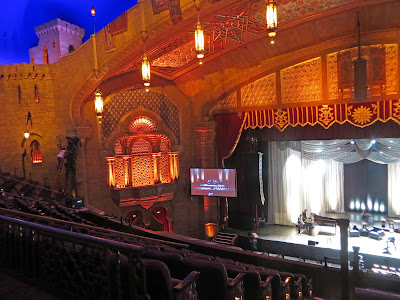 Here's one place that everyone who goes to Atlanta should visit -- the Georgia Aquarium. It's really big and has some really big fish! That's a whale shark in the picture below. You can actually swim in the tank with them -- they don't eat people. They aren't whales, which are mammals, but are the world's largest fish. 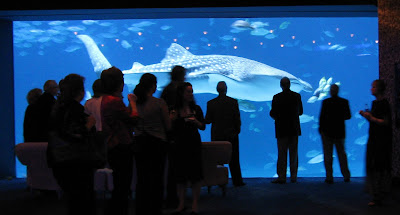 My favorite animals were the beluga whales -- this one seemed to be putting on a show for us. 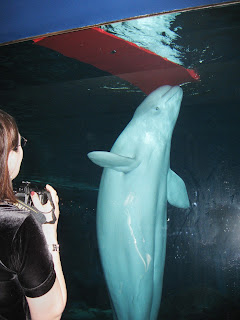 I have enjoyed writing to you this year. I hope you enjoyed my stories and my pictures. Have a great summer -- I hope you get to do some traveling.