Does this look like your school?  This is the school where Lyndon Johnson, the 36th president of the United States, went to school.  The school had only one room for all grades.  When he became president, Johnson signed more education bills into law than any other president.  He knew education was very important. 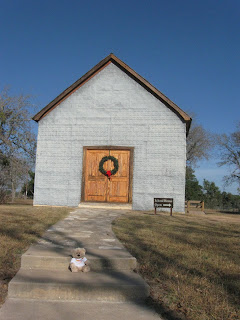 Tiger took my picture.  You can see the school room through the protective window. 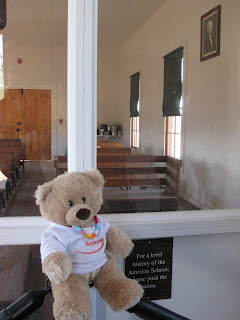 This is a photo of a picture of President and Mrs. Johnson and one of their dogs.  Their Texas ranch, called the Texas White House, when President Johnson was in office, was where they liked to rest and entertain friends.

Their house is very large but very homey.  President Johnson was a U.S. Senator for many years before he became president, so he always had an office in his house.  The house is decorated as it was when he was president.  After the Johnsons died, they gave their house to the nation so we can learn more about the president, his family and his life. 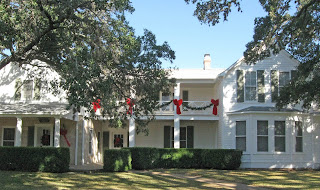 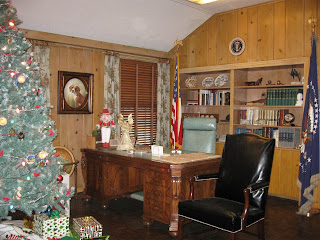 Even when he was relaxing, President Johnson stayed close to what was going on in the nation and the world.  He even had a phone at his place at the dining room table! 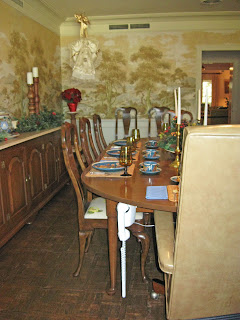 Sometimes he had official meetings and speeches when he was at the ranch.  This is me pretending to be the first girl -- and the first bear -- to become president! 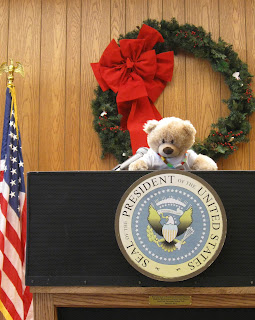 President Johnson, who served as president from 1963 through 1968, did a lot of good things for the country.  He worked for civil rights, voting rights, health care for the elderly, the space program and -- without President Johnson, there would be no Big Bird.  He signed the act creating the public broadcasting system.

It wasn't all work when he was at the ranch, though.  This is one of his favorite cars -- and it's really special.  It's called an amphicar and can drive on land and in the water.  He used to take guests for rides around the ranch -- and didn't tell them about the car's special ability.  He'd head full speed toward one of the lakes on the property, then yell, "Oh, no, the brakes don't work!' 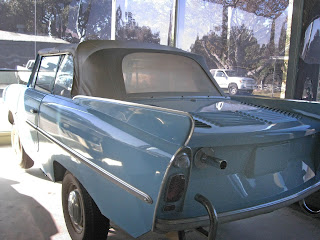 Imagine how surprised his guests were to find themselves riding across the lake! 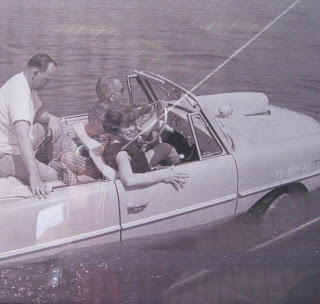 I really enjoyed learning about this president.  I'm just glad I wasn't in that car!

Posted by Elaine Warner at 9:13 PM No comments: