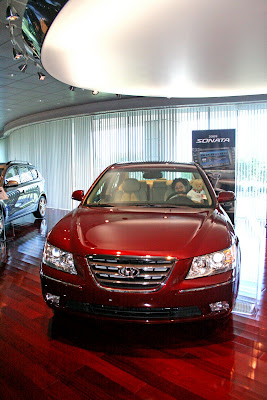 I learned something today. Don't decide you're not going to like something until you try it. This has been a tough trip for me. Miss Elaine has been in meetings a lot and I've been sitting in the
hotel room. Yesterday we had an excursion. We were going to see the sights here in Montgomery, Alabama, including the Hyundai car plant. Car plant!!!! I thought it sounded
boring and so did Miss Elaine but she said we had to go.
Boy, were we wrong. It was the coolest ever! I got to see -- and sit in -- some new cars and we got on a tram and toured the plant. Did you know car bodies start out with a big roll of steel -- like a giant paper towel roll?
Then they go through a machine that cuts them into shapes; then into another machine called a press. It's in two parts -- the flat piece lies on top of the bottom part and the top part of the machine raises 'way up then smashes down -- like 52 elephants stomping on it. The piece comes out shaped like a door or a trunk lid or whatever piece they're making!
The plant is full of robots -- not like R2D2 but just bendy arms with suction cups on the end. They pick up the pieces and fit them together. It takes 16 and a half hours to make a car -- including the 9 and a half hours it takes for the paint to dry!
After the car is made, it gets tested on the test track -- every single car! This plant makes 900 cars a day. Can you see Miss Elaine and me sitting in the cute red Sonata? We really liked that car.
So I had a great time and so did Miss Elaine. I guess we both learned something! Don't say you don't like something -- like broccoli or visiting a car plant -- if you haven't tried it!
Love,
Vanilla
Posted by Elaine Warner at 6:07 AM No comments: 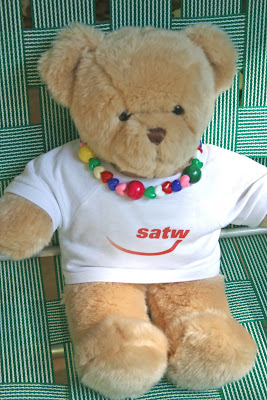 Thank you, thank you, thank you, Mrs. Kysar's class. I love my name -- Vanilla -- and I'm glad I'm a girl. I'm so glad I'm going to be sharing my adventures with you this year -- I think we'll learn a lot about the world. Do you like the necklace Miss Elaine made for me? I do!
Love,
Vanilla
Posted by Elaine Warner at 2:57 PM 1 comment: