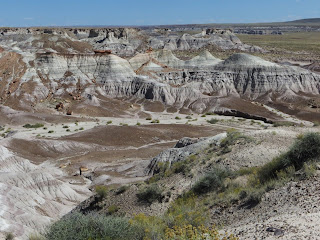 Hi Kids,
Did you know that over one hundred years ago, people in our government gave us a great gift?  As explorers headed west, they found many beautiful areas of the country -- places no one had ever seen. These explorers knew that these places should be saved for all time -- so their children, grandchildren and even great-great-great-grandchildren could see them, too.
In 1872, President Grant declared that the area around the Yellowstone River was so special it should be a national park. That was our first one.
As time went on, this seemed like such a good idea that President Theodore Roosevelt decided in 1906 that other special places should be preserved also. Ten years later, the National Park Service, the department of the government that is in charge of all the national parks and other nationally-designated sites, was created. Next year the NPS will celebrate its 100th birthday. I want to help celebrate by seeing as many of these places as I can.
On my recent trip, I got to see several of them. The land in the picture above is in the Petrified Forest National Park in Arizona. I think I sent you a postcard from there. Part of the land in the park is called the Painted Desert. You can see why by looking at all the colors in the hills. These colors are created by different minerals in the soil. 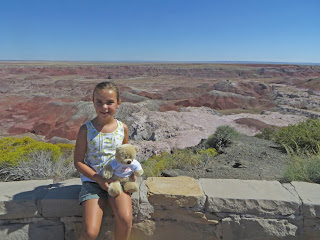 I met a new friend here. She is seven -- just like some of you -- and she liked the colors, too. 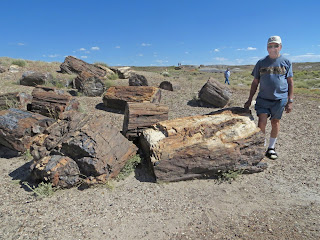 This is Mr. Jack. He is standing by some petrified trees. These trees were alive and growing over two million years ago. They have become fossilized. That means that water seeped into the wood, depositing minerals which eventually replaced all the natural wood material with stone. Over thousands of years, the stone trees broke into smaller pieces. 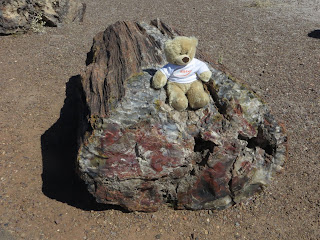 And this is me! 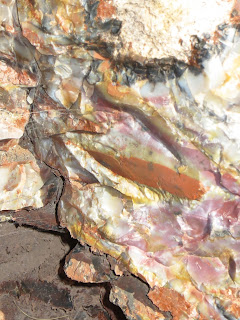 This is what the petrified wood looks like up close. You can tell it is rock -- it doesn't look like wood at all. I think it is very pretty, don't you? Aren't you glad that these special places are protected? No one is allowed to take even a tiny pebble from a national park. So all these great things will be there for you when you go!

Posted by Elaine Warner at 8:14 PM No comments: