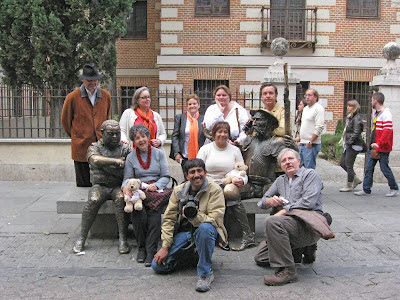 Ola, Kids,
That's Spanish for "hello" and "oso" is Spanish for "bear." Now I can growl in two languages! The picture above is of the group of writers Miss Elaine and I traveled with on this trip to the La Mancha area of Spain. We started our trip by visiting the birthplace of the writer Miguel Cervantes. If you look carefully, you'll see I'm sitting next to the statue of Sancho Panza and my bear friend is sitting next to a statue of Don Quixote. These are the main characters in Cervantes' masterpiece, "Don Quixote." 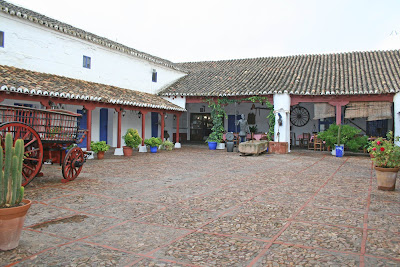 We headed out into the countryside to find locations that Cervantes would have known well. This inn was built in the time of Cervantes (around 1600). 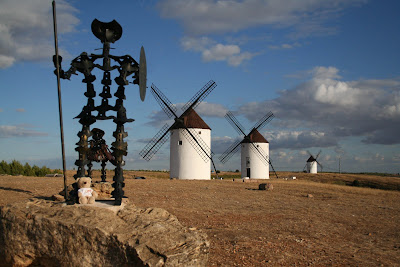 There aren't very many wind-powered windmills like this anymore. They were once used for grinding grain. Some of them still work and are on display during special celebrations. The arms would be covered with fabric called "sails." I'm sitting by a modern sculpture of Don Quixote. He thought the windmills were giants and tried to joust with them. 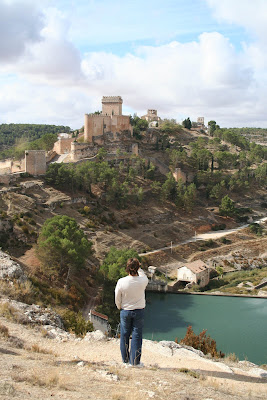 This is a very old walled city with a castle. I think it looks just like a fairy tale. 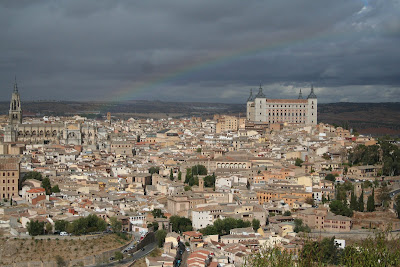 The city of Toledo is very old -- over 2000 years old. It had just quit raining when Miss Elaine took this picture. Can you see the rainbow? Toledo was an important city in Roman times. In the 8th century, it was captured by Moors (Muslims), then 200 years later, recaptured by Christians. In spite of this, it is famous because Jews, Muslims and Christians all lived here together for a significant period of time. There is a lot of Moorish influence in the architecture, making the city very beautiful. 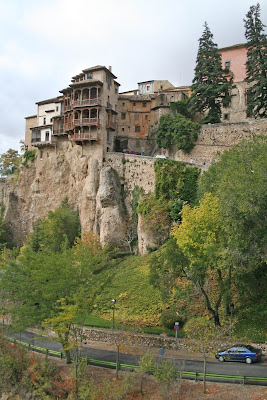 One of my favorite spots is another very old city -- Cuenca (pronounced kwen-ka) is built on a plateau between two rivers which have cut deep gorges around the city. The houses above date back to the 1500s. They are called "hanging houses" because they hang over the edge of the cliffs. 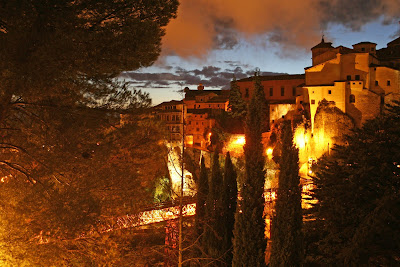 Miss Elaine and I stayed in a centuries-old monastery that has been turned into a luxury hotel. This was the night-time view from our window. You can see the bridge across the gorge and the historic area of Cuenca on the other side.
Spain is very beautiful and the food is wonderful. I want to go back -- and so does Miss Elaine.
Love,
Batman
P.S. Please keep reading -- I've tried to catch you up with my travels since Miss Elaine has been so slow about putting pictures on my blog!

Posted by Elaine Warner at 3:29 PM No comments: 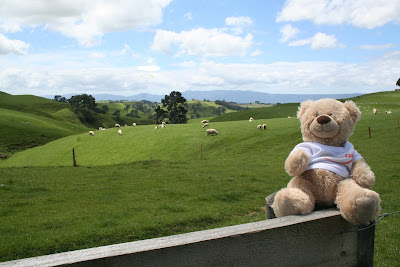 Hi Kids,
The shot above is the landscape where Hobbiton is located. Filming on the movie, "The Hobbit," was going on when we were there so we didn't get to see the little hobbit houses. There are lots of sheep in New Zealand -- more sheep than people! 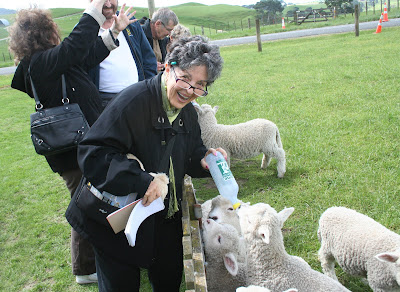 We got to feed some baby lambs -- but if you'll notice, I'm stuck under Miss Elaine's arm and she's getting to have all the fun! Grrrr. 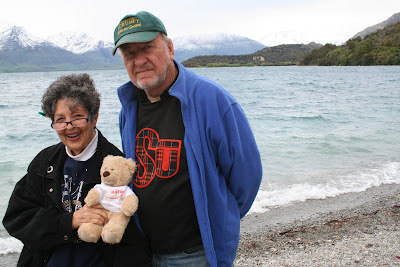 It was late October when we went to New Zealand -- the beginning of their summer. But someone forgot to tell the weatherman! It was COLD. Thank goodness I have a fur coat. Mr. Jack accidentally left his coat in the airport in Los Angeles. He had to wear one of Miss Elaine's jackets. It's a good thing that she lives in such fear of being cold that she always packs extra. 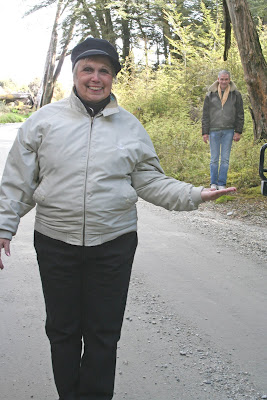 We had tea in a lovely forest that was in "The Lord of the Rings -- it represented Lothlorien, the realm of the elves. Here we experimented with perspective to show how the actors who played hobbits were made to seem small. This man was actually the tallest person in the group and the lady was second-shortest. I was actually shorter but I couldn't hold my arms right! 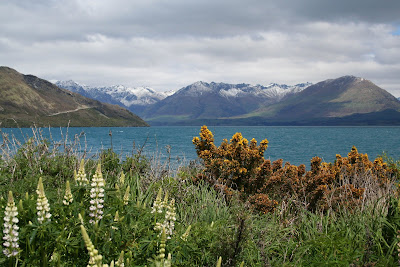 Lake Wakatipu was also used in the Lord of the Rings movies -- and it played a Scottish loch in the movie "The Waterhorse: Legend of the Deep." New Zealand has such a variety of scenery that lots of movies are filmed here. 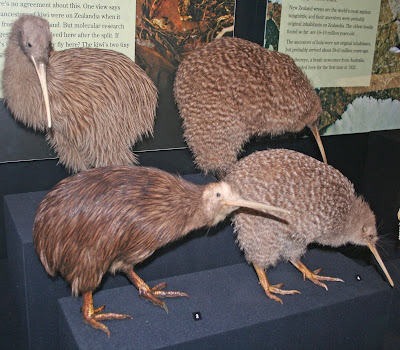 One afternoon we went to the National Museum in Wellington, the capital of New Zealand. These are kiwis. They can't fly (well, these REALLY can't fly because they're stuffed) so it's easy for predators to catch them. New Zealand tries to keep them in preserves, but cats, ferrets and weasels are pretty sneaky. The museum also has the preserved remains for the biggest giant squid ever caught -- it actually looks pretty yucky. 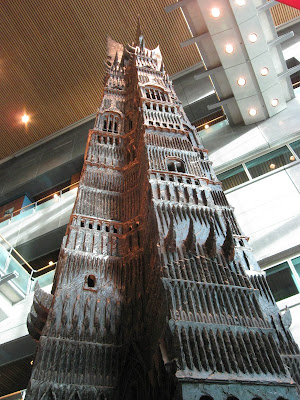 At the final dinner of Miss Elaine's conference, the people from the movie studio that made the Lord of the Rings movies brought props and costumes used in the movies. This is the actual Black Tower -- and it's only about 14 feet tall. Miss Elaine got down on the floor to take this picture. I was pretty embarrassed -- but I have to admit it's a good angle! 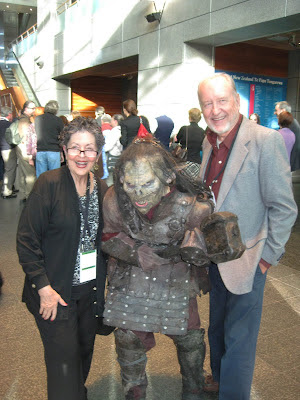 Miss Elaine had a travel writers' meeting in New Zealand but it was also a great time to celebrate the fact that she and Mr. Jack have been married 50 years. This orc helped them celebrate!
Love,
Batman

Posted by Elaine Warner at 1:50 PM No comments: 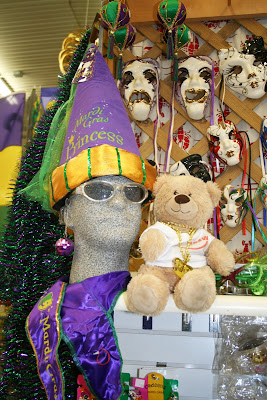 Hi Kids,
Me again -- this time showing you pictures from my trip to Shreveport, Louisiana, for Mardi Gras. In the picture above I'm posing with some Mardi Gras items at Tubbs Hardware -- it's the Mardi Gras headquarters in Shreveport. 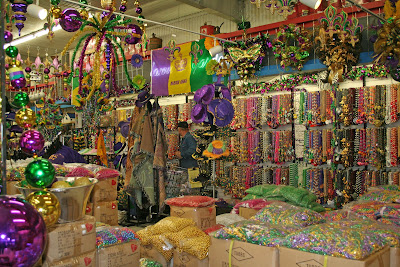 As you can tell, they have LOTS of beads and other Mardi Gras things. 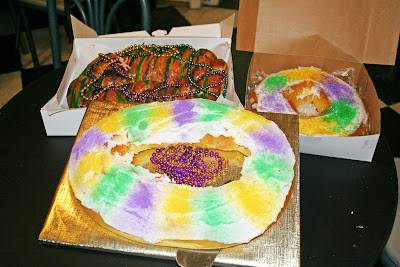 We got to sample three different King Cakes. If you look carefully at the one on the top left, you'll see the baby. Usually it's baked inside the cake -- but I guess this baker was afraid someone would swallow it!

The night before the parade, we went to the loading party. That's when everybody hangs their beads on pegs on the floats so they'll be easy to grab and throw during the parade. There were some really big floats. The theme of this parade was "Bad Boys." I don't think Captain Jack Sparrow is so bad! 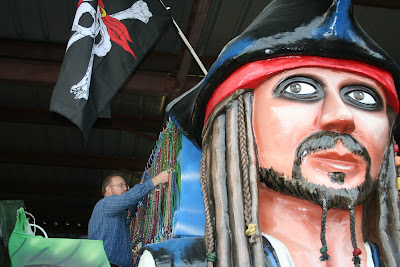 Here I am trying to catch beads (they're also called "throws") -- it's not easy when you're my size. 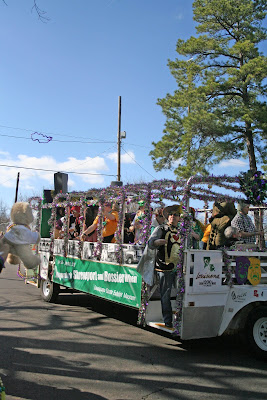 This is Aiden Sanchez. He's in second grade in Louisiana. He stood next to me at the parade and even gave me some of his beads. 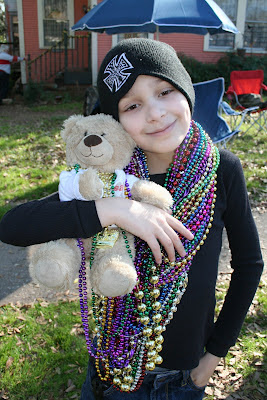 This is me at the hotel modelling all my beads. They were really heavy! I'm glad to don't have to wear them every day. 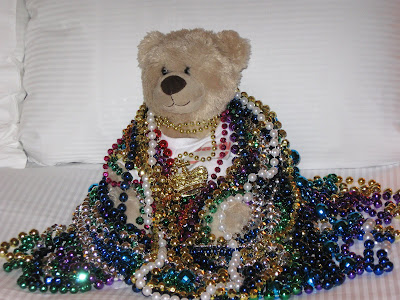 Posted by Elaine Warner at 1:22 PM No comments: