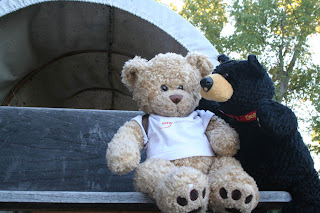 This is where I met Oso. Miss Elaine and I got up early for a campfire breakfast. That's us by an antique chuckwagon. 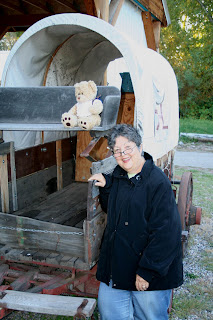 A chuckwagon is a cowboy kitchen. Pulled by horses, it hit the trail with the cowboys. The cook carried all his supplies on the wagon. The back pulled down so he had a table for working. Everything was cooked over a campfire. 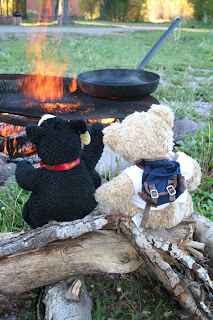 After breakfast, we went to town to take and old-fashioned steam train ride. That's Oso and me with the fireman. 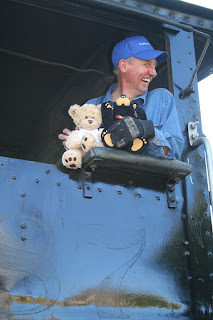 This fireman doesn't put fires out -- he makes them! He shovels coal into the firebox to keep the fire burning. The fire heats a big container full of water. When the water boils and makes steam, the steam pressure makes the engine go. If he lets the fire go out -- the train stops! He must have done a good job because we went up over some mountains and the train never stopped! 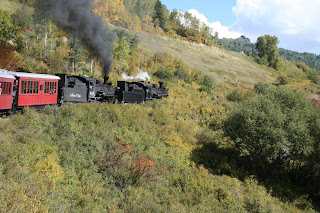 Posted by Elaine Warner at 6:18 AM 0 comments
Labels: Chama
window.google_render_ad(); 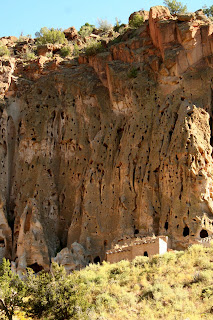 Bandelier is 70 per cent protected wilderness area but most visitors just see the part I saw -- Frijoles Canyon. Frijoles means beans in Spanish. I don't know why they would name the canyon Beans! In the canyon and on the cliffs are the remains of ancient pueblo houses and ceremonial structures. Miss Elaine left me in the car when she climbed up the cliffs to see the pueblos. She said she might need both hands to help her climb. I think she should buy a backpack to carry me in! She did get me out later so I could see some of the canyon and I met Ranger Brad Traver. 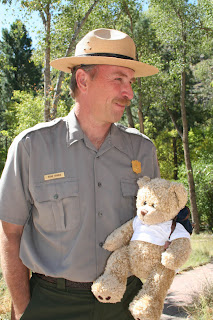 I also got to go to the Visitor Center where I got to feel a real deer antler. 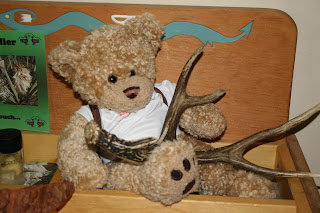 Posted by Elaine Warner at 6:09 AM 1 comments
window.google_render_ad(); 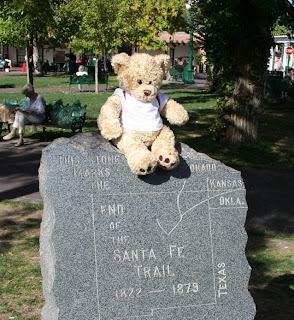 Hi Kids, I promised I'd put up pictures from my first trips so here we go. My very first trip was to New Mexico. And I started in Santa Fe, the state capital. Here's my picture sitting on top of the monument that marks the end of the Santa Fe Trail, an important route that went from mid-Missouri to New Mexico. Did you know part of the trail crossed the Oklahoma panhandle? The other picture is of the La Fonda Hotel where I stayed. You'll notice that the architecture of the hotel replicates an Indian pueblo. There has been a hotel or inn on this spot since the days of the Trail (1822 to 1879). 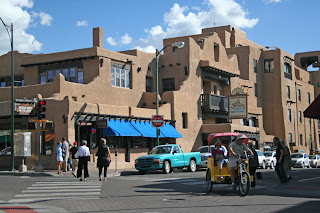 Posted by Elaine Warner at 5:57 AM 1 comments

Posted by Elaine Warner at 7:56 PM